Matt Shea, Washington State’s firebrand state representative from Spokane County is extremely pleased to report that the endeavor to create a new state out of eastern Washington which would be the 51st state named Liberty has grown leaps and bounds.

States Shea, “The momentum of the Liberty State movement has been incredible. We have been getting county captains left and right. We’ve got people from all different walks of life that are joining the drive and dozens and dozens of flags have been sold and are flying all over the state. We get a lot of pictures of them.

“The flag design is made up of three stars that represent opportunity, resiliency, and the rule of law. The wheat sheaves are a nod to our agricultural traditions, the broken sword is a nod to the sacrifice to the people that have been bringing this issue for literally decades to try to make happen. The broken shackles symbolizes that we don’t want any more of the yoke to the tyranny of downtown Seattle. The blue in the background is really truth and loyalty and of course you have the very centerpiece of the entire flag which is the Osprey, a symbol of freedom really indigenous to our area as well and I think one of the great designs that I’ve ever seen in people of really love that design. It’s really been well received.

“We have a drafting committee that is drafting the proposed Constitution for the state of Liberty to then put it out for public comment. One of the greatest minds in the Constitution working on it is Mark Herr, President and founder of Center for Self-Governance. 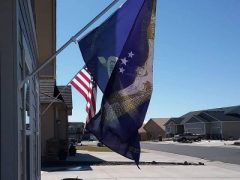 He stated that some people try to make the claim that it will be the poorest state in the country. He says that’s just not true since it has such vast natural resources. The new state’s geography already generates power in eastern Washington for 11 other states. He states that there is so much area and room for everything from the tech sector to growing plants, to manufacturing and all kinds of other endeavors with more than enough room. 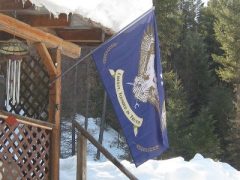 Shea pointed out that one of the newest questions that comes up is whether or not Congress would vote for this because article 4 section 3 of the U.S. Constitution says a simple majority vote in the state legislature is required whereas in Congress they won’t vote for something like this because they argue it upsets the voting balance in the Senate.

He says interestingly, Puerto Rico recently voted to become the 51st state. If balance in the number of states is the main concern, the state of Liberty could, along with Puerto Rico or Northern California (the proposed state of Jefferson movement that’s also underway) be voted on at the same time and then you wouldn’t have that balance upset. Problem solved, welcome to the union, Liberty USA. So… 51st or 52nd, who’s picky, right? 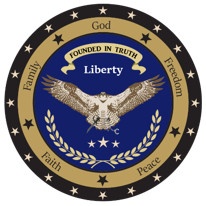 Asked how close the Washington legislature is to voting for this, Shea answered, “Actually we’re very close in Washington in the Senate where we’re one vote down and in the house, we’re two votes down for majorities. Our next election will be absolutely critical to see which direction we head. At the very least we will have a hearing and we will have an opportunity to bring it to the floor for a vote. I can’t speculate on the results, but we will have an opportunity to do that if we’re in the majority and there will be a discussion.

“A lot of the folks on the other side of the state say we’re a bunch of welfare freeloaders over here in eastern Washington to where they send all the money and stuff. So let us go.

“If we split the state, that’s actually going to benefit Seattle as well with more money for their social programs. They can do all the socialistic experimenting they want to on the other side of the state and sometimes I’ve heard from people over in downtown Seattle say that they feel that people like us in eastern Washington are hindering their ability to head toward the socialist utopia that they want. If we split the state they would be able to do that. So it actually helps in both senses on both sides.”

“The great part about splitting a state, and this mechanism our founding fathers left us, is that it is the mechanism so that geographic areas can be better represented according to the traditions, culture, heritage, beliefs, and values of the local people.”

Shea mentioned that Northern California’s effort to split into the state of Jefferson is very organized. He said his Liberty group has copied a lot of the things they’ve done in Jefferson’s efforts, shared ideas back and forth and stay in close contact with them. He also said Jefferson has a court case going on down there in regards to proportional representation, in other words, they feel like their world and their vote has been diluted and their representation is being diluted. They don’t have the representation that was envisioned by the founding fathers. 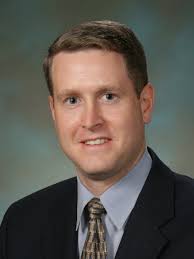 “They’re going to push the court case,” Shea stated. “We’re in close contact with them to keep track of where they are. In fact, I had Mark Baird on my radio program today who is one of the big proponents of the state of Jefferson.

“The next mover going forward in our endeavor is to establish county captains in all counties in the proposed state of Liberty. We’re getting county commissioners to vote on a resolution in support of the state of Liberty. There are three counties that are already looking at doing that.

“In the near term we are doing presentations, we have already a half dozen presentations that are already in the queue. The next one will be in Newport Washington this weekend the 31st and 1st. Most of these presentations are very, very well attended and every time very well received.”

He said it’s important for people to understand that you don’t have to be a separate state to claim ground for liberty. You can have a flag flying and just claim that ground for liberty. It’s a mindset, a way of life. He thinks there are a lot of Americans today that know something is wrong, who want to get back to the mindset of truth, the mindset of freedom and liberty and that our property rights really do exist. 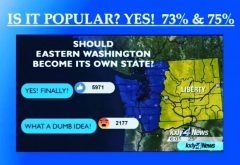 When asked about Spokane becoming the capital of the state, he said that it should probably be located more near the center of the new state and that’s something people can decide later. “We’re just trying to get the opportunity to become a new state that truly represents these values of culture, heritage, and traditions that we have here,” he said.

Matt Shea sums it all up, “We’ve answered all these questions so nobody can really have anything they can object to anymore. Then you have a small group of leftists out there who come forward to say ‘The true agenda behind this must be that these guys want to set up a racist, Christian cult.’ You know that when they bring that argument up that they’ve lost. So I take that as a very good sign that if that’s all they have then we’re headed in the right direction.

“A great friend of mine Rev. Matthew Cummins grew up in downtown Chicago and he moved up to Stephens County. He’s become a great source of inspiration because he saw what socialist ideology resulted in and he’s been fighting against it for years. He’s been one of the big people that has been at these rallies and was at the Colville Rally that really brings that perspective of having lived in an area that really went to the ways of socialism. What a great man to have in our area that has that perspective. I think that’s the key lesson of freedom and that is that the calling of freedom can be anywhere.”


Don't use Facebook? More commenting options below (scroll down)