— Reprinted with Permission of The John Birch Society —

In June 2014, delegates from many nations gathered at United Nations Headquarters in New York to continue their work on a program that would disarm civilians in America and throughout the world. The individuals who attended the meeting gathered under the name “Programme of Action on Small Arms and Light Weapons in All Its Aspects,” or PoA for short. The plan would have PoA assist national governments to identify and trace privately owned weapons. A published summary of the PoA proceedings clearly indicated that not only small arms and light weapons would be targeted, but also the ammunition used by each. 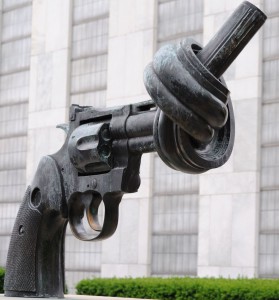 A truly ominous admission of PoA’s intentions included having “international, regional and subregional arms of the UN” carry out the collection and banning of the peoples’ weapons. What are some of the UN’s “regional and subregional arms”? A thorough look at the European Union shows how overwhelmingly this bloc of nations is under overall UN control. The Obama administration and numerous members of Congress are determined to have our nation become a part of the EU via the Transatlantic Trade and Investment Partnership (TTIP). Similarly, the Trans-Pacific Partnership would create an EU-style bloc of nations for numerous Pacific Rim nations, including the United States.

PoA delegates returned in June 2015 to UN Headquarters, where they discussed furthering their plans to disarm all civilians and also to create what is termed “the International Tracing Instrument” (ITI). This new branch of UN activity will work toward the “marking and tracing of small arms.” Though ITI is admitted to be “in its infancy,” there is no doubt that an eventual goal of the would-be gun grabbers includes sophisticated ways to track and then collect weapons possessed by ordinary citizens.

Another threat to weapon ownership surfaced at the June 2015 PoA meeting when the latest draft of the PoA agreement was revealed to include a provision that would force gun manufacturers to add RFID chips, biometrics, and GPS technology to the guns they produce. These added items, says Joe Wolverton, “will help the government slowly but surely disarm civilians.” He adds that U.S. negotiators have already told their UN cronies of plans to require each gun to have such tracking capability.

There are only two reasons why the UN’s leaders want to disarm the American people: (1) destroy our nation’s independence; and (2) make it impossible to resist tyranny. Mr. Wolverton urges withdrawal from the United Nations as a needed step to retain freedom and independence. We certainly agree.

Article 2 of the Charter of the United Nations states:
Nothing contained in the present Charter shall authorize the United Nations to intervene in matters which are essentially within the domestic jurisdiction of any state or shall require the Members to submit such matters to settlement under the present Charter….
The Second Amendment to the U.S. Constitution proclaims the God-given right of anyone to “keep and bear arms.” Ownership of a weapon falls within the “domestic jurisdiction” of our nation and is none of the business of the United Nations. But it is clear that U.S. leaders are conspiring with the UN gun-grabbers to deprive the right of U.S. citizens to be armed. (The word “conspiring” surely fits because America’s leaders and UN leaders are working hand-in-glove to disarm people and bring all nations under a UN-dominated New World Order.)

Anyone who intends to retain the right to be armed must be made aware that focusing on the Second Amendment alone isn’t enough. Aiding The John Birch Society’s effort to “Get US Out! of the United Nations” must also be undertaken. If our nation doesn’t untangle itself from the UN, owning a weapon will soon become impossible.

Phone your representative (202-225-3121) and senators (202-224-3121) and request that Congress put an end to U.S. participation in the UN’s Programme of Action on Small Arms and Light Weapons on the basis that it would lead to disarming American citizens. Tell your representative and senators to cosponsor H.R. 1205 in the House to get the U.S. out of the United Nations, and to introduce and cosponsor a companion bill in the Senate.

Click here to send an editable pre-written email to your representative and senators telling them to terminate U.S. participation in the UN’s Programme of Action on Small Arms and Light Weapons and also to cosponsor and ultimately pass H.R. 1205 in the House and Senate to get the U.S. out of the United Nations.

Thanks.
From Your Friends at The John Birch Society