Obviously, voting for candidates because they are nice is absolutely the wrong reason for electing them. Nice is nice. But how elected officials make judgments and actually vote according to our U.S. and Idaho Constitutions is what matters.

Government should be run like a business, with objectivity, a balance sheet and most importantly by following its business plan which would be our U.S. and Idaho Constitutions and the GOP national and state platforms.

If your candidates are following the socialistic platform of the recently crazed Democrats, you should change parties and then make sure the GOP candidates are actually following their great platform and not transforming into Dimms anyway, to be known as RINO’s (Republicans In Name Only). It seems as though the obstructionist Dimms of late, might believe that getting fools on their side will assure them of being elected to anything. There are many very good people blindly following this hijacked, now outwardly socialist, party out of nothing more than shear loyalty.

Poker-faced candidates who say what you want to hear about limited government, the 2nd Amendment, Idaho sovereignty, forest management, abolishing the travesty of Common Core in our schools, spending our money and readily satisfying any question you ask should most certainly be vetted. Doing so for incumbents is easier using a voting index such as mentioned below.

Making that tough decision about people you want to believe in without a voting record is a tough judgement call, but voting for them mostly because they are nice just doesn’t wash. Look at accomplishment and integrity in their past and their knowledge of our Idaho and U.S. Constitutions.

Again nice is nice, and good decorum has its place, but sound judgement and allegiance to an oath should rule the day. Voting for a wrong reason is nonsense and damages us all.

REAL NICE IS VOTING CORRECTLY WITH OUR CONSTITUTIONS

We would love nice people who vote correctly. But we have far too many nice people who vote incorrectly with our Constitutions! We probably need some grumps in elected office who are madder than hell at how these nice people are taking us away, to awaken them or run them off. We need serious people who will deal with the seriousness of their intended calling with our Constitutions. They are put there to exercise correct judgement. Social issues, tree hugging and such have their place in our hearts but the business of government spelled out in our Constitutions should be a limited affair and these tertiary issues are for local governments and the private sector.

The Alinskyites have so successfully and constantly kept these ‘concernments’ in the forefront of legislatures’ agendas because it all further breaks us down financially and by distracting our focus on the serious business at hand with which the government is really meant to cope.

It is obvious that either most elected officials today don’t really know these two constitutions or they don’t take their constitutional oaths seriously. The way our system has evolved, unfortunately, they are probably too busy campaign fund raising, which is not an excuse for a poor voting record. They need to prioritize, vote correctly and for the most part, re-election will be helped immensely. Then all is truly nice.

THE HELP YOU NEED FOR VOTING CORRECTLY IN IDAHO 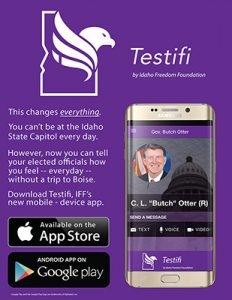 The Idaho Freedom Foundation (IFF) has roots going back to 1977. They state on their website, “Our goal is to hold public servants and government programs accountable, expose government waste and cronyism, reduce Idaho’s dependency on the federal government and inject fairness and predictability into the state’s tax system.

“IFF’s work has been credited with saving taxpayers millions of dollars, eliminating failed government programs and holding politicians accountable like never before in the history of the state.

“Idaho Freedom Foundation gives a voice to the voiceless, the people who don’t have the means, the time or the wherewithal to take on the special interests, which include labor unions, the government bureaucracy or businesses that seek a handout. We hold lawmakers accountable when they say one thing and do another, when they promise conservative leadership but then vote to expand government, support special interests or make it harder for Idahoans to get ahead and stay ahead.”

IFF publishes a voting index called the IdahoFreedomIndex.com. Their Idaho Freedom Index can also be found instantly on a cell phone by installing their groundbreaking impressive application named Testifi.

The Idaho Freedom Foundation states how they grade bills for their voting index:

THE HELP YOU NEED FOR VOTING CORRECTLY IN THE U.S. CONGRESS

For the U.S. Congress see “The Freedom Index at JBS.org: A Congressional Scorecard Based on the U.S. Constitution” which rates congressmen based on their adherence to constitutional principles of limited government, fiscal responsibility, national sovereignty, and a traditional foreign policy of avoiding foreign entanglements. In this second 6 month session of the 115th Congress just completed on February 19th, 2018 here is how abysmally our congressmen and senators in Washington, D.C. voted with the Constitution: U.S. House 45% and U.S. Senate 31%. So there you see now why we are where we are.

Utopia in politics are the elected officials with incredibly stellar voting records who also happen to be very nice people.

“It is the responsibility of the patriot to protect his country from its government.” – Thomas Paine

Will Conservatives Shoot Themselves in the Foot Again?