A compelling case against Montana US Senator Jon Tester being re-elected is presented in a new video by author Elaine Willman who interviews Christopher Kortlander, owner of the historic town of Garryowen, Montana and founding director of the Custer Battlefield Museum.

The 19 minute video focuses on Chapter 7 of Kortlander’s new book ‘Arrow to the Heart’ – The Last Battle at the Little Big Horn, in which he exposes the factual events of the 2006 US Senatorial election’s voter fraud that was critical not only to the state of Montana but to the entire country since it tipped control of the US Senate to the Democrats by one vote. 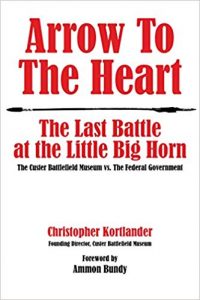 Chapter 7 in his book reveals that Montana was the last state to turn in its votes after the Crow Agency’s precinct finally reported its votes at 2 AM in the morning. His book states that Senator Tester’s campaign was writing $40 checks for Crow votes within 50 feet of the front door of the tribe’s polling place which is only 5 miles from where Kortlander’s museum is located. He knows only too well about the checks since some of the tribal members cashed them at his museum’s store.

Willman points out that the critical material facts in the case of voter fraud was that the ballots that came at 2 in the morning that changed the election came from a polling precinct on the Crow reservation that was located on federal trust land where the Montana secretary of state has no oversight or enforcement authority. They just had to trust the ballots in that box with no state oversight. See Wilman’s informative article on Election Fraud here.

“One of the reasons for the video at this time, in 2018, prior to the upcoming election, is to note that those same voting precincts are still located on federal trust lands where the state of Montana’s secretary of state has no jurisdiction or enforcement authority,” states Willman. “That’s how Tester was re-elected in 2012 and that’s going to be a huge issue in 2018, because nothing has changed.”

Christopher Kortlander adds, “Right, and we’re not saying that we should disenfranchise the American Indians from voting, what we’re saying is the polling precincts still need to be located on the reservations, but they need to be located on property that’s under the jurisdiction of the State of Montana which is in charge of running the election. The Secretary of State is in charge of the elections in every state and that is what makes us the United States of America, all 50 states. The Federal government never runs a Federal election, they leave it up to each of the 50 Secretaries of States to be in charge.

“So how can you have ballot boxes that are unlocked, unchecked, with Native Americans running the elections throwing non-Indian poll watchers out of the buildings, and won’t even allow them to accompany the ballot boxes, which is under a Montana code penalty, for not being physically with the ballot boxes during transportation and delivery to the election officials at Big Horn County Court House in Hardin, Montana. The non-Indians were not allowed to do that, which is a violation of the Montana code.”

Kortlander says the Crow reservation is not actually breaking the law the way it is set up now is that there is no law, because again, because state law, criminal and civil jurisdiction, cannot be enforced on tribal trust federal property. It’s exempt, because the Crow reservation is a non-public law 280 reservation. What that means is explained on a great Wikipedia page on non-public law 280. What that means is that civil and criminal jurisdiction from the State of Montana cannot be enforced on this reservation to an American Indian.

The video wraps up with mentioning that it doesn’t take a whole lot to swing a vote and that Jon Tester won that late night last count by only around 3000 votes and there was documented evidence of double voting, name changing and voting by deceased voters.

Wilman points out that this has had tremendous impact on what has gone on on this reservation for at least 12 years and those that have benefited from this have not been willing to make the change. She says that Montana voters really need to contact the Montana Secretary of State Corey Stapleton’s office at 406 444-2034 and demand correcting this flagrant wrong.