The level of hypocrisy coming from Sec. Zinke could not be more unbelievable. In a recent interview on Breitbart, he blasted “…environmental terrorist groups that have not allowed public access…” to public land, not allowed timber harvesting or grazing, then claimed that “…public lands belong to everybody, not just the special interest groups.” Have these terrorists not been backed by federal and state laws, including executive and secretarial orders, which have forbidden access and reduced logging and grazing? Do those laws not validate that public land use has been turned over to special interest groups? Doesn’t environmentalist objectives include influencing public policy? It isn’t environmentalist “policies” causing these problems as he claims, it is the federal government implementing those polices. Who is he trying to fool?

Not only that, Sec. Zinke himself has contributed to environmental causes with his secretarial orders (SO) starting with his Conservation & Big Game Migration Corridors SO 3362. This order gave the green light to environmental groups for continuing their pursuit in creating migration corridors which they want designated as protected conservation land, meaning those areas would be off-limits for recreation and hunting in order to limit wildlife disturbance, and avoiding and minimizing development, all of which are specifically stated in that order. Sec. Zinke is starting his crusade for migration corridors in southwest Wyoming, claiming there can be a balance between development and conservation. The environmentalists don’t think so and are fighting that very issue in Casper. You can’t have it both ways Sec. Zinke.

Does this not continue limiting access which he so loudly objects to in the interview? Environmental groups such as Backcountry Hunters (BHA) and Greater Yellowstone Coalition (GYC) understand how their goals are being supported by Sec. Zinke with this SO. The Great Northern Landscape Conservation Cooperative (GNLCC), which these environmentalists belong to, supports the identification of “…priority corridors for conservation…” and holds webinars on how migration corridors are being threatened by humans.

Sec. Zinke, in spite of revoking the activities of the GNLCC and its federal partnerships with environmental groups in SO 3349, immediately turned around and reinstated their activity with the same SO 3362. The GNLCC and all of its partners, including Idaho Fish & Game (IDFG), have very specific goals for corridor designation in their connectivity agenda.

According to Sec. Zinke, these environmentalists conduct “…fund raising on hype…”. The truth is, these environmental organizations take advantage of Department of Interior (DOI) funding under the Land and Water Conservation Fund (LWCF), which is used for conservation objectives that align with the environmentalists. Also, the GNLCC was created by the DOI, implemented by the DOI agency U.S. Fish & Wildlife Service (USFWS), and funds environmental groups such as Yellowstone to Yukon. Maybe Sec. Zinke should check with his accounting department. Senators Crapo and Risch, along with Rep. Simpson, are working to make the LWCF fund permanent rather than let it expire at the end of September this year. Environmentalist groups must be thrilled to once again see favor from our elected representatives, and more of your tax dollars going to their objectives.

Under Agenda 2030 Biodiversity, #197, it is very clear Sec. Zinke is on the path to accomplish what is outlined, the “…importance of the conservation of biodiversity, enhancing habitat connectivity…” and #212 calling for “…greater efforts towards the conservation of mountain ecosystems, including their biodiversity.” And why wouldn’t he given the DOI is a member of the International Union for Conservation of Nature (IUCN), which contributes to United Nations goals for protection of the environment, promotes international environmental law, and uses corridors for conservation. Through his actions, it is clear he supports these non-American groups over American citizens while trying to hide his indiscretions by calling environmentalists names.

As a former Navy Seal, which Sec. Zinke so proudly reminds us, perhaps he should be reminded of the oath he took. 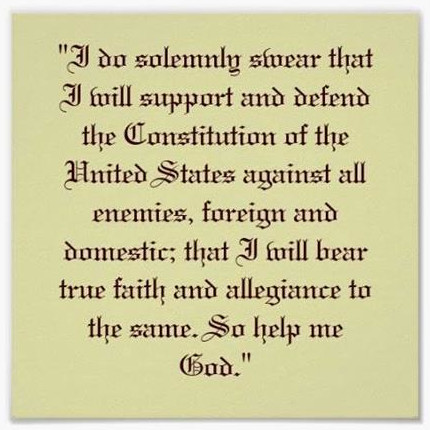 He swore to defend the Constitution against all foreign and domestic enemies. It was he who labeled environmentalists what they are, terrorists. By definition, a terrorist is a “…person who uses unlawful violence and intimidation, especially against civilians, in the pursuit of political aims.” While these environmental terrorists do not engage in violence towards civilians, they do exert violence over our environment, destroying it as Sec. Zinke seems to understand and points out in his interview. That is terrorism. Should Sec. Zinke, since he chose to use this language, instead change his direction towards opposing these domestic environmental terrorists as he swore to do, rather than supporting their activity behind the scenes?

It is just unbelievable.