— Published with Permission of TheNewAmerican.com —

It turns out that President Donald Trump was right, after all. The United Nations finally admitted last week what virtually every sensible observer had already realized. In short, the so-called UN “Paris Agreement” pretending to battle alleged man-made global warming will make no real difference in the global climate, even if you accept the UN’s discredited hypothesis and models surrounding CO2 driving temperature change.

Of course, that is not how the UN phrased it. Instead, the “dictators club,” as critics refer to the UN, was trying to drum up support for even more extreme sacrifices of liberty, self-government, and prosperity to satisfy the wrath of the climate gods. But by beating the dead and mutilated climate horse, the UN inadvertently confirmed that even under its debunked models, the “climate” regime adopted by Obama and others in Paris would not come anywhere close to staving off the supposedly impending Apocalypse caused by your breathing and your SUV.

In fact, based on the UN’s phony projections, the Paris Agreement wouldn’t make a dent in the alleged problem, even if every government and tyrant actually obeyed the pledges — something no serious person expects to happen anyway. And so, rather than crush American industry, prosperity, and liberty for no reason, analysts declared that Trump was right and justified to announce earlier this year that the U.S. government would withdraw from the illegal pseudo-treaty.

According to a press release put out by the dictators club about the UN Environment Program’s Emissions Gap Report, even if every government and tyrant that signed up for the Paris regime were to actually obey, it would represent “only a third of what is needed to avoid worst impacts of climate change.” The UN’s scaremongering report proceeded to advocate massive government spending — $100 per “ton” of CO2 — on “reducing emissions,” as well as on additional UN schemes that would purport to force governments to ban or subsidize various things. The report’s fretting about “tons” of CO2 fails to mention that human breathing alone is responsible for many millions of tons of CO2 emissions every single day.

“As things stand, even full implementation of current unconditional and conditional Nationally Determined Contributions makes a temperature increase of at least 3 [degrees Celsius] by 2100 very likely — meaning that governments need to deliver much stronger pledges when they are revised in 2020,” the press release about the UN’s report continued, complaining about the prospect of the U.S. government following through in withdrawing from the scheme. In response, the UN report demands that more wealth be extracted from taxpayers to subsidize cronies in economically non-viable “green” energy.

Leading UN bureaucrats echoed the sentiments, sounding like doomsday cult preachers selling snake oil. “One year after the Paris Agreement entered into force, we still find ourselves in a situation where we are not doing nearly enough to save hundreds of millions of people from a miserable future,” speculated UN Environment Program (UNEP) boss Eric Solheim. “Governments, the private sector and civil society must bridge this catastrophic climate gap.” The report was released as governments and dictatorships gather in Bonn, Germany, for another round of “climate” negotiations.

The UN, obviously, intended its latest round of teeth gnashing as a way of terrorizing humanity into giving up even more liberties and prosperity. Ironically, though, leading climate commentators turned the tables, pointing out that the UN had inadvertently confirmed what critics of the UN and the Paris Agreement have been saying all along: It’s beyond useless, and regardless of one’s view on climate, it cannot possibly be worth the price.

Responding to the latest round of UN whining, James Delingpole of Breitbart, internationally known for his hilarious debunking of climate alarmism, explained the significance of the UN claims. “President Trump’s decision to pull out of the Paris accord is now fully vindicated,” he wrote. “Had the Agreement been ratified, the U.S. would have handed countries like China and India a huge competitive advantage over the American economy. But — as even the UN now admits — it would have made no discernible difference to the alleged problem of ‘global warming.’ So what, exactly would have been the point?”

Pointing to various charts, graphs, and data, Delingpole also highlighted the fact that the Communist regime ruling China and the government of India both pledged to continue increasing their CO2 emissions while Obama illegally pledged to practically suffocate the U.S. economy by slashing CO2. Having growing emissions from China and India of the “gas of life,” as scientists refer to CO2, is just fine, of course. In fact, many leading scientists say increased CO2 will be a major benefit for humanity and the planet. But if one accepts the UN’s debunked hypothesis, the whole Paris scheme would seem to make little sense.

“See: despite all the airy good intentions expressed in Paris, the countries of the world have no desire to reduce their carbon dioxide emissions just to appease a Green Goddess no serious person genuinely believes in,” he explained in Breitbart. “But then, saving the planet was never the point of Paris. Rather it was, as Rupert Darwall describes in his excellent new book Green Tyranny, a scheme designed permanently to weaken the U.S. by forcing it to operate on the same constricting terms that the environmental left has imposed on Europe.”

Of course, the UN’s latest admission is hardly the first time that even the most fanatical man-made global-warming theorists have ridiculed the Paris Agreement as useless at best. Indeed, even under the UN’s most rosy projections, the alleged diminution of “global warming” that would result from the scheme amounts to a rounding error, in a best-case scenario. And plenty of alarmists have noticed it, too.

In May, for example, leading climate alarmist James Hansen, formerly with NASA, exposed the fraud in clear terms — from the perspective of somebody who actually believes the UN-backed theory underpinning climate alarmism. “[The Paris agreement] is a fraud really, a fake. It’s just bull**** for them to say: ‘We’ll have a 2C warming target and then try to do a little better every five years’,” said Hansen, referring to the UN’s silly “goal” of 2 degrees Celsius warming by the end of the century. “It’s just worthless words. There is no action, just promises. As long as fossil fuels appear to be the cheapest fuels out there, they will be continued to be burned.”

More cautious and skeptical believers in the man-made global-warming theory have exposed the fraud, too — using the UN’s own numbers and calculations! Danish statistician Dr. Bjorn Lomborg, the president of the Copenhagen Consensus Center, for example, crunched the numbers by assuming — almost certainly inaccurately — that the UN’s long-debunked “climate” models were valid. What he found makes a complete mockery of the alarmist cause as well as apologists for the UN’s “climate” regime created at Paris.

“We will spend at least $100 trillion dollars in order to reduce the temperature by the end of the century by a grand total of three tenths of one degree,” Lomborg explained, noting that the draconian cuts in economic activity and energy production would amount to the equivalent of postponing warming by less than four years. “Again, that is using the UN’s own climate prediction model.” And as regular readers of this magazine know, the UN’s “climate” models have been totally discredited by the observable scientific evidence. (Article continues below chart.) 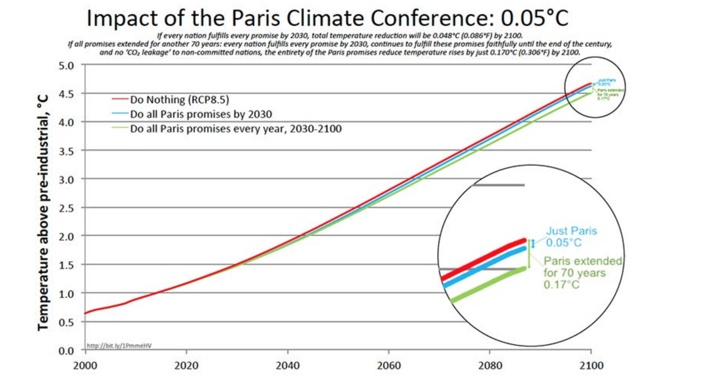 Others have produced similar findings. Researchers at the Massachusetts Institute of Technology, for instance, compiled the pledges made by governments and tyrants as part of the UN’s “Paris” scheme, then compared the result with their own preexisting projections. They found that even assuming the warmist theory was correct, the Paris scheme would reduce temperature by some 0.2°C by the end of the century — a number too small to even properly measure at the global level. When they used UN Intergovernmental Panel on Climate Change (IPCC) projections from 2000, the researchers found no improvement, period. And for that, Americans are supposed to suffer trillions in lost prosperity, not to mention the lost liberty.

Unfortunately, despite the impression given by much of the fake news-peddling establishment media, President Trump has not technically exited the UN’s Paris Agreement yet. In reality, the pseudo-treaty, having never been ratified by the U.S. Senate as required for all treaties by the Constitution, is legally meaningless. But practically speaking, Obama’s illegal so-called “executive agreement” has not yet been formally repudiated, meaning the bureaucracies could conceivably continue implementing its provisions. Republican voters, less than one-fourth of whom even believe the man-made global-warming theory, must remain involved in exposing the scam.