As usual, the media and liberal critics of Trump have it all wrong.

Before I get to DACA and the wall, I will tackle Trump’s “offensive words” about Haiti and African nations. Trump called those countries by a crude name. He certainly could have chosen his words more carefully. But…who cares? He told the raw truth. As usual, he was right on the money. Trump said exactly (although perhaps crudely) what 63 million American taxpayers who voted for him were thinking.

Trump summed up the weakness of America—we’re far too nice. We think about everyone, but our own people and our own taxpayers. Why on earth would we allow the world’s poor, unskilled, desperate and dependent masses to come into our country, while we’re $20 trillion in debt? Those days are over. It’s time to be picky and choosy.

We don’t have enough jobs for middle-class Americans. We don’t have enough money for poor Americans. We have no obligation or need to let in more people who desperately need to use up our resources and our hard-earned taxpayer money. It’s time for “America First.” It’s time for extreme vetting. It’s time to cut off “Visa lotteries.” It’s time to let in skilled craftsman from Norway, and business owners from China, and doctors from Israel.

We elected him to drain the swamp and clean out the bad people and bad policies entrenched in DC. The truth hurts. Get used to it. Trump’s not going anywhere. He has a tough job to do, to set America on the right course. He might use a few tough words. Words I’ve heard on the streets of New York thousands of times—from liberal voters.

By the way, I’ve used words like that before myself—to describe what’s become of Chicago, Detroit and Baltimore.

By the way, liberals shouldn’t get too excited. Trump didn’t lose one vote with his “sh-hole” comments. I have many liberal elitist Ivy League friends. They all felt the need to tell me how terrible and offensive Trump’s words were. They called him “racist.” Guess what? None of them was ever voting for Trump anyway.

But all my middle class, working class and small business pals and fans have weighed in. They said, “Bravo. Finally, someone in power talks like we do, says what we’d say, let’s it fly, doesn’t sugarcoat the truth.” Trust me, 63 million Trump voters are secure for 2020.

Now to what really matters. Trump is winning. The economy is booming. There was even more good news in the past few days. Over 2 million Americans are getting bonuses because of Trump’s tax law. Trump has no reason to give in on DACA. We’re holding all the cards. If Democrats want DACA make them give us the world in return. We have no reason to give in, unless we get everything on our wish list. 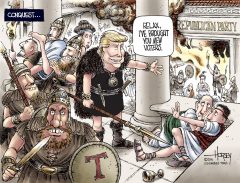 Democrats are the ones who want DACA so badly. What cards are they holding? Trump is “Making America Rich again.” His agenda is a success. He’s in the driver’s seat. He can negotiate from a position of strength. The 63 million Americans who voted for Trump don’t want DACA. Why would we give in, in return for nothing?

Here’s the list—plain and simple. We want the full funding of the wall…funding for thousands of new border and ICE agents for enforcement…extreme vetting…an immediate end to chain migration…e-verify, so illegal aliens can never be hired again…end to the Visa Lottery…an end to birthright citizenship…and a 5-year ban on welfare and food stamps for any foreigner in the USA.

That’s called negotiation. We don’t want DACA. We have no reason to give in on DACA. We won the election, remember? We control all levels of government, remember? But if you want it, you’re going to have to give us everything we want. And I mean everything. Plus the kitchen sink.

And as long as Trump holds firm on that list, he will have the full support of 63 million Americans to use strong language and offend anyone he wants by telling the raw truth.

Because he’s our “Trump the Barbarian.”