Few acts of WWII deception were as effective as the First United States Army Group, aka FUSAG. Using inflatable tanks, planes, jeeps and bogus infrastructure build up that, from the air, looked like a huge army preparing to invade France via Calais. Lead by none other than ole’ Blood and Guts General Patton, the “Ghost Army,” fooled German military leadership into believing that the D-Day landings at Normandy, the largest invasion in the history of the world, was a decoy. 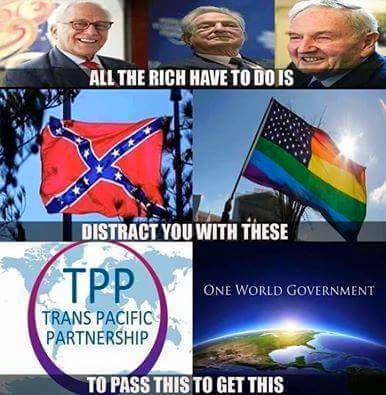 While the news was filled with riots in Ferguson and Baltimore, Bruce Jenner and now the Confederate battle flag, Congress voted away American sovereignty. The near black out of media coverage covering the Trans Pacific Partnership, which is a massive agreement setting up new rules for over 40 percent of the global economy. It essentially hands U.S. sovereignty over to multinational corporations, awarding them total global monopolies over labor practices, immigration, drug pricing, GMO food labeling, country of origin labels, environmental protection, criminalization of garden seeds and much more.

TPP and its evil twin sister TTIP (The Transatlantic Trade and Investment Partnership) will destroy what is left of the American middle class as wages for all but the bottom and top few will be drastically reduced and many jobs will be lost due to outsourcing. Consider it NAFTA on steroids with a bit of cyanide inserted into it. The Center for Economic and Policy Research estimates the loss for America will be 25 times greater than any possible gain from it.

With so much at stake, is it not a legitimate question to ask why there has been near silence on this subject from the people entrusted to be the watchdogs over the American republic? After all, the media is supposed to play a central role in communicating to the public what is happening in the world and how it will affect them. Yet the silence on TPP from our main stream media is deafening. Perhaps it is because Time-Warner Inc., the parent company of CNN, has at least four lobbyists working to influence the Trans-Pacific Partnership deal by peddling influence to both Congress and the U.S. Trade Representative office on the deal. Comcast, the parent company of NBC and MSNBC, has a team of at least ten lobbyists seeking to influence the TPP on “International IP Protection.” Twenty-First Century Fox, a subsidiary of News Corporation, the parent company of Fox News, has a team of three lobbyists working to influence the TPP. Disney Corp, parent company of ABC News and Fusion, is lobbying on theTPP regarding intellectual property enforcement.

Instead of informing the American public of what this trade agreement is and the areas it covers the corporate media giants that own the majority of news outlets in the US have skillfully diverted American attention away from the real issues and consumes their attention with irrelevant or far less important issues.

So just as inflatable tanks, jeeps, planes and trucks were used in concert with fake radio broadcasts and sound effects to fool the German High Command into withholding vital armored divisions on D-Day, our watchdogs of democracy have showcased staged riots, a former sport star with a serious mental issue and now the ghost of Confederacy in order to keep us ignorant of TPP.

There is to be a vote on TPP coming before Congress in the near future, it is up to us to put enough pressure on Congress so this treaty will not be passed. Failure is not an option.