I hate to disappoint liberals and the liberal mainstream media. But they haven’t a clue why I voted for President Trump. They either don’t understand…they’re blind, deaf and really dumb…or they’re purposely misrepresenting my views.

So, here goes. Here’s why I voted for President Trump (and I think many of the 63 million Trump voters will agree)…

Forget the infamous 1% the media loves to quote and discuss. That’s the super-rich who the media wants you to resent. That group has no effect on your life. What matters is the 3.8%.

A new study is out. It shows that 3.8% of Americans work over 60 hours a week. I’m one of them. I work 60 hours a week, in a slow week. I think people with that kind of dedication, discipline, and work ethic should be celebrated. People in that 3.8% should be thanked by government, not targeted by the IRS.

For me, voting for Trump wasn’t about “racism” or “sexism” or “homophobia” or “Islamophobia,” or the myriad of other things liberals claim. I voted for Trump because I’m sick of working 60 hours and then being targeted, mocked, denigrated and punished.

I voted for Trump to turn around the economy that Obama killed with taxes, regulations, Obamacare, climate change and a thousand other ignorant, radical, liberal (i.e. socialist) policies meant to redistribute wealth and empower lawyers, bureaucrats, and regulators.

Liberal Democrats like Obama and Hillary represent the over 100 million Americans on some form of welfare or government handout. The people who think government owes them something.

Trump was the first president who cared about the 3.8%. The people who put in all the long hours. We needed someone to fight for us. Someone to celebrate us. Someone to reward us. Someone to say, “You did build that. You are what makes America great.”

I voted for Trump because I knew he’d turn around the economy and help those who work the long hours…versus those who think they deserve a short work week, a job guaranteed for life, or a check from government.

I don’t care about Stormy Daniels. I don’t care about President Trump’s sex life before becoming president. There clearly was no Russian collusion. These are all distractions to prevent American voters from seeing the simple truth – The U.S. economy is booming again. Trump is succeeding. Trump is a breath of fresh air. 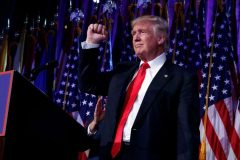 Want proof? I turned to one of the smartest guys in the room – Mark Skousen, economist, business professor, financial expert and the founder of FreedomFest – a prestigious economic gathering held each July in Las Vegas with 2,500 attendees from across the globe. Interestingly, Mark never liked or supported Donald Trump. But Mark is also one of the most honest guys I know. After crunching the numbers, he has come around to agreeing President Trump is doing a magnificent job of growing the economy.

Here are the facts you won’t hear in the liberal mainstream media. Skousen reports the US economy under Trump is exploding like nothing since Reagan. The Fed and media quote GDP – which has made a dramatic recovery under Trump. But the more accurate gauge of the economy’s health is a new stat called GO for “Gross Output.”

GO reflects the full value of the business supply chain and business to business spending. This model therefore better recognizes the vital contributions of entrepreneurship, capital investment and innovative technology.

Skousen’s new measurement of economic growth was featured in Tuesday’s Wall Street Journal. The results under Trump are remarkable. For three quarters in a row under Trump, GO accelerated. The supply chain took off in the fourth quarter of 2017, growing at a 7.5% annualized rate. That’s more than double the rate of GDP growth and the fastest pace since before the Great Recession. Real GO, which includes both GDP and the supply chain, rose at a 4.7% rate.

Skousen says this boom in business activity should translate into higher economic growth (GDP) soon. In other words, the numbers indicate President Trump has dramatically turned around the US economy. And the best is yet to come!

The 3.8% was right. Trump is good for the Americans who get up early, go to work, and pay the taxes. That’s why the 3.8% will always support Trump.