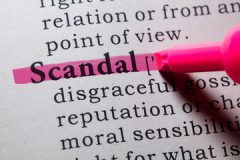 I’d like to write more about the booming Trump economy. About bonuses for 2 million workers and bigger paychecks for 90% of taxpayers because of the Trump tax cuts. And Trump’s amazing triumphant appearance at Davos—telling the entire world that America is now open for business.

But I can’t use this column for all of that. Because there is much more important news involving the exploding FBI/DOJ scandal and the shocking, about-to-be-world-famous FISA memo. Many in FBI/DOJ leadership will be fired or forced to resign. Many others will wind up serving prison time.

The scandal involving texts from FBI investigator Peter Strzok and his lover, FBI attorney Lisa Page, is so deadly, it goes far beyond the wildest imagination of anything in a Hollywood movie.

Just from reading a few of the texts…

FBI agents talked openly in texts about how Hillary was about to win the presidency and no one wanted to be on her bad side. FBI Attorney Lisa Page texted to the lead Hillary investigator (her lover): “She might be our next president. The last thing you need us going in there loaded for bear. You think she’s going to remember or care that it was more DOJ than FBI?”

So, the intimidated FBI agents rigged the investigation, asked her softball questions, didn’t record her interview, didn’t put her under oath and then changed the wording from clearly criminal to merely careless.

Here’s how bad the story gets. Even the crooked FBI agents out to fix the investigation against Hillary believed and recommended that FBI Deputy Director Andrew McCabe could not possibly be in charge, after his wife took a $700,000 donation from Terri McAuliffe, the Clinton’s great friend and financial bagman for decades. Even THEY were embarrassed and aghast that McCabe would ignore this massive conflict of interest and be in charge of exonerating Hillary.

It’s clear top FBI leadership hated Trump, used fraudulent pretenses (a fake dossier paid for by Hillary and her campaign) to get FISA warrants against Trump, and were out to stop Trump at all costs. As I’ve warned from day one, the main purpose of obtaining illegal wiretaps to spy on the Trump campaign was to pass along his campaign plans to Hillary and her team. This was how the FBI leadership tried to guarantee a fixed election victory for Hillary. This was what they called their “insurance policy.”

It’s clear top FBI brass formed a “secret society” with the sole goal of destroying the newly elected President Trump. A Congressman has spilled the beans this “secret society” wasn’t just FBI agents. It included federal judges, federal prosecutors, and at least one Attorney General of a large state.

These FBI rogue plotters used “burner phones” because they were so afraid their plot could be uncovered. Burner phones? Is this the FBI, or the Columbian Cocaine Cartel? Is there even a difference anymore? 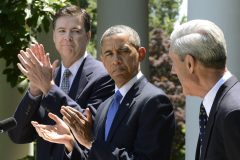 We have no idea how bad this gets. The FBI suddenly claimed 50,000 texts from Strzok and Page were gone, missing, disappeared. Two days later the DOJ Inspector General announced he found them. Of course, he did. FBI forensic experts find missing texts from bad guys every day. That means the FBI was purposely trying to hide these 50,000 texts. Can you imagine what must be in these texts, if FBI leadership is willing to commit fraud to hide them?

We just found out today that the texts from the phone of rogue FBI Deputy Director Andrew McCabe are missing. Really? Can you imagine what must be in them?

Folks this is called a coup. An argument could be made this rises to the level of “treason.” This is supposed to only happen in a Banana Republic. But that’s exactly what America became under Barack Obama—a cesspool of crime, corruption, conspiracy and media/big government collusion.

The infamous FISA memo will soon be released—most probably in the next week. Several GOP Congressmen report it’s shocking…worse than Watergate…reminds them of the KGB. We know specific names have been leaked from this memo about this terrible scandal—James Comey, Andrew McCabe and Rod Rosenstein.