In this era of confounding fake news that has become the mainstay of ‘Big Media,’ traditional freedom loving Americans are starving for news sources they can believe in.

What has morphed into the blatant stuff we are getting in spades as ‘news’ from today’s tag team of the progressive left and their comrades in what has been known as the ‘Main Stream Media’ (MSM) at CNN, NBC, CBS, ABC, PBS, AP, New York Times, Washington Post, Huffington Post, et. al. and big city newspapers across the nation had its roots in a brazen 1915 effort to take control of America’s big newspapers by the cartel, at that time, known as the J.P. Morgan interests.

THE INFANCY OF ‘FAKE NEWS’

Congressman Calloway announced that the J.P. Morgan interests bought 25 of America’s leading newspapers, and inserted their own editors, in order to control the media.

“In March, 1915, the J.P. Morgan interests, the steel, ship building and powder interests and their subsidiary organizations, got together 12 men high up in the newspaper world and employed them to select the most influential newspapers in the United States and sufficient number of them to control generally the policy of the daily press in the United States.

“These 12 men worked the problems out by selecting 179 newspapers and then began, by an elimination process, to retain only those necessary for the purpose of controlling the general policy of the daily press throughout the country. They found it was only necessary to purchase the control of 25 of the greatest papers. The 25 papers were agreed upon; emissaries were sent to purchase the policy, national and international, of these papers; an agreement was reached; the policy of the papers was bought, to be paid for by the month; an editor was furnished for each paper to properly supervise and edit information regarding the questions of preparedness, militarism, financial policies and other things of national and international nature considered vital to the interests of the purchasers.

“This contract is in existence at the present time, and it accounts for the news columns of the daily press of the country being filled with all sorts of preparedness arguments and misrepresentations as to the present condition of the United States Army and Navy, and the possibility and probability of the United States being attacked by foreign foes.

“This policy also included the suppression of everything in opposition to the wishes of the interests served. The effectiveness of this scheme has been conclusively demonstrated by the character of the stuff carried in the daily press throughout the country since March 1915. They have resorted to anything necessary to commercialize public sentiment and sandbag the National Congress into making extravagant and wasteful appropriations for the Army and Navy under false pretense that it was necessary. Their stock argument is that it is ‘patriotism.’ They are playing on every prejudice and passion of the American people.”

We have for decades since then been fed a steady flow of what has to be called propaganda for the interests of global power elitists who would have us become socialists as a member nation run by those same unelected, unaccountable few who know best for everybody about everything.

Today’s level of prejudice and passion ‘against’ the American people might be respected by Russia’s Pravda but it is abhorrent to we who expect a Free Press. For years, many members of the Insider Establishment’s Council on Foreign Relations (CFR) hold key media posts.

States senior editor of The New American.com, William F. Jasper in his article ‘CIA’s Mockingbirds and ‘Ruling Class Journalists’ which is a must read for any stubborn doubting Thomases. How compelling is this for his opening?

“Via admissions against interest and Freedom of Information requests, it is well documented that many reporters publish stories at the behest of government and globalists.

“On October 30, 1993, the Washington Post published a stunning column by its ombudsman, Richard Harwood. Entitled “Ruling Class Journalists,” Harwood’s article was an extraordinary admission against interest coming directly “from the horse’s mouth,” so to speak. His startling and completely unexpected disclosure (which was probably intended more as a boast than a confession) vindicated the claims long made by this magazine and its predecessors (American Opinion and The Review of the News), to wit, that America’s “Establishment,” as represented by the world government-promoting Council on Foreign Relations, had secured a virtual monopoly over our nation’s “mainstream media,” the MSM.

“For decades, the Post and other pillars of the CFR thought cartel had either ignored these charges, or scorned them as lunatic ravings. But here was the Post’s Harwood describing the Council on Foreign Relations as “the nearest thing we have to a ruling establishment in the United States.” Harwood wrote:

“In the past 15 years, council directors have included Hedley Donovan of Time Inc., Elizabeth Drew of the New Yorker, Philip Geyelin of The Washington Post, Karen Elliott House of the Wall Street Journal, and Strobe Talbott of Time magazine….

The mass media are guilty of something more serious than mere sloppiness in reporting the facts or chronic liberal bias.

The establishment media are conscious, willing accomplices in the power elites drive for global control.

“Moreover, wrote Harwood: “The executive editor, managing editor and foreign editor of the New York Times are members, along with the executives of such other large newspapers as the Wall Street Journal and Los Angeles Times, the weekly news magazines, network television executives and celebrities, Dan Rather, Tom Brokaw and Jim Lehrer, for example, and various columnists, among them Charles Krauthammer, William Buckley, George Will and Jim Hoagland.”

“Notably, the Post ombudsman acknowledged that the CFR’s ruling-class journalists “do not merely analyze and interpret foreign policy; they help make it.” This vindicated yet another charge we had frequently leveled at the CFR and the Big Media cabal it had formed (and for which we had just as frequently suffered scoffs and sneers). – Click here to read the rest of this insightful in-depth article. 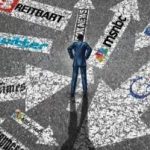 Jasper also wrote another very revealing article ‘NEWS: Alternative, Real, Fake:’ “Today, as in all times of crisis, to be a Patriot, to take a stand for Truth, is dangerous business. To host a news website or blog that challenges the ruling powers, entrenched corruption, and the forces of darkness is a perilous thing. We are beginning to see just how perilous. We are not yet suffering the types of outright censorship and iron-fisted persecution of politically incorrect thought that already befall our brethren in banana republics or in communist tyrannies such as China, Cuba, Vietnam, and North Korea, or in Muslim dictatorships such as Iran, Sudan, and Saudi Arabia. Nor are we yet experiencing the levels of intimidation, prosecution, fines, and imprisonment being meted out in the European Union and Canada for daring to speak truth to power. But anyone who doubts that similar oppression is in the works for America is deaf and blind to the onrushing statist steamroller that is smashing the First Amendment — and all other treasured rights as well.

“During the eight-year reign of President Barack Obama, the advocates of Orwellian controls for the ostensible purpose of combating “hate speech” and “thought crimes” made frightful progress. Federal and state government officials, together with their cronies in the major media and tech giants such as Google, Facebook, Amazon, Twitter, and Microsoft, have ganged up to crush the upstart alternative media that are challenging (and have already surpassed, by some important metrics) the MSM (mainstream media) Fake News monopoly that has protected and projected the globalist agenda for decades. Breitbart News, the Drudge Report, InfoWars, Natural News, and dozens of other Internet-based news providers have already been targeted and are feeling the impact of the corporate-government jack-booted heel on their jugulars. — Click here to read the rest of this insightful in-depth article.

ANYMORE, WHEN THE MSM GET IT RIGHT, THERE IS PROBABLY A MOTIVE

Proving how brazenly confident the MSM is now about the legitimacy of the Council on Foreign Relations (CFR) being the roots of the ‘Establishment’ is the fact that they all reported openly what Hillary stated at her Foreign Policy address at the CFR in 2009. 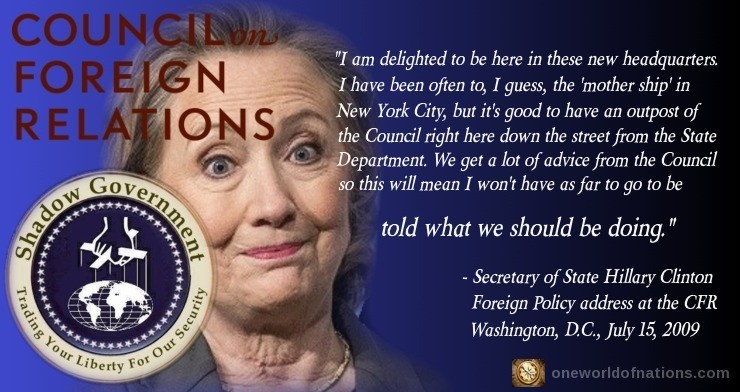 Most Americans today are oblivious to the ramifications of what she admitted openly that day: i.e. the diabolically cunning intent to steer us into a One World Government.

We must awaken to our need for original source, vetted news and as President Reagan said ‘Trust but verify.” Fox News/FBN, talk radio, and TheNewAmerican.com are about as good as it gets.

Some of the extensive in-depth reporting exposing Fake News by The New American.com: