The issue stirred up by Grayeyes illuminates the real problem faced by San Juan County, thanks to political radicals and the federal courts. Years of federal overreach and meddling has made Native Americans and non-Natives in the county slaves to the government, and unwillingly to each other.

Since 1984, the federal courts have made slaves of everyone living in San Juan County, Utah by trampling on our voting rights. The federal courts have dictated to the citizens of the county whom they can and cannot vote for. This has caused a number of problems over the years and has incited tension between local Native Americans and all other residents of San Juan County. 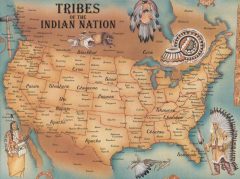 Just recently, Willy Grayeyes, a Native American who lives in another state, wanted to run for San Juan County Commissioner. Once it was determined that he didn’t live in San Juan County–nor in the state of Utah–he was removed from the election. Unbelievably, this enraged some left-wing radicals who claimed the county was vindictive against Grayeyes because he was a supporter of the Bears Ears National Monument. Others claimed the county was racist, when in fact, Grayeyes lives outside of Utah and lied about it. His candidacy was a violation of state law and had nothing to do with Grayeye’s race or the Bears Ears.

The issue stirred up by Grayeyes illuminates the real problem faced by San Juan County, thanks to political radicals and the federal courts. Years of federal overreach and meddling has made Native Americans and non-Natives in the county, slaves to the government, and unwillingly to each other.

What does sovereign mean?

A: one possessing or held to possess supreme political power or sovereignty

B: one that exercises supreme authority within a limited sphere

A Nation Within a Nation

The reservation system is the very definition of the term, “a nation within a nation,” and has been a failed system from day one. The reservation system was shaped intentionally to promote racial contention, which necessitates more federal control. It continues to form a barrier between races in the county, as well serving as a tool for progressive radicals to promote their agendas. They do this by playing the shame game, using the Native American plight. which leads to a politically-correct reverence for their ancestral, sacred, wants needs over other groups of people. America’s colonization is a past wrong used to shame and blame all non-Native Americans for the displacement of Native Americans tribes. The fact that not one person alive today had anything to do with that is lost on the race provocateurs. Yet there are many today on both sides of the political aisle who use the reservation system to get gain by stripping away the rights of Native Americans and non-Natives alike. They do this by manipulating and whoring out the Native American culture with no regard for what the cost will be to the people. Their best tool is pulling the heart strings to create shame, pit groups against one another, and promote racial division.

United Under One Law

San Juan County has been hit with these tactics time and time again, so what can be done to stop it?

We need to stop letting these outside forces divide us. We need to be united as one people, and one county comprised of American Citizens who are protected by one law – the US Constitution. We should build upon our common ground and treat one another the way we want to be treated. We should never use race or religion to divide us or to get gain at the expense of others’ liberty, the way Willy Grayeyes, certain federal judges, and other bigoted Natives and non-natives are doing.

The racial division in San Juan County was exacerbated by the ruling in 1984, and most recently, the racial gerrymandering of voting districts by Federal Judge Shelby. This brings us back to the problem of being a nation within a nation. This system dictates that anyone elected from the Navajo Nation (reservation) will not be subject to the same laws, taxes, and rules that govern the county or the non-Native people in the county. Issues such as taxation without representation and racial contention arise due to contradictory governance, which necessitates greater federal control of local policies.

There is no need today for a federal reservation or separate and sovereign Indian nations. Some would say it’s racist to suggest that the reservation be done away with, but this is the only way we can be one nation under the US Constitution, and truly on an equal footing.

In the 1860’s hundreds of thousands lost their lives during the Civil War, which supposedly ended slavery and placed all states under the governance of the US Constitution. Some may argue that the Civil War was fought over state rights, not slavery, but the fact is, no state or any government has the right to enslave its people. By doing so they violate the rights of citizens and therefore lose any lawful jurisdiction over those citizens.

Unfortunately, the federal government has ignored the fact that they were enslaving Native Americans when they decided to make the reservation system in the United States permanent. I believe this was done by design to create racial division, prevent assimilation of Native Americans, and justify perpetual federal control over them.

We can stop it all right now by becoming one nation of American Citizens; standing our ground against the immoral and illegal acts mandated by the federal courts to crush our rights an enslave us. More than anything, we must put hatred behind us and become one people who love our liberty, freedom, and our Creator. If we can do that we can stop the evil that has been forced upon us.

It is simple we will either work together to live or we will allow it to destroy us. The choice is ours…