I have been a practicing physician and surgeon for the past 44 years. During that time I have watched the Medical Profession become politicized in ways that many people (patients) would be surprised about. Before proceeding with my concerns, I would like to say that I have been very proud to work with doctors and nurses and technicians who are incredibly great people, whose motives are pure, and whose primary concern has always been for the wellbeing of their patients.

Over the years however, there has been a growing trend away from direct patient care, toward a more communal institutional model for practicing medicine. More physicians are finding the stress and responsibility of taking care of sick patients to be overwhelming, and are opting out for second careers in hospital administration or even becoming attorneys or businessmen. I was asked to lunch by a group from BSU who wanted me to consider working on a project at the University. The President of The University— at the end of lunch said to me—”John, you could affect many people at one time in a classroom, but when you take care of patients you only impact one person at a time”. He was showing his preference for a communal model of influence. I certainly have a bias about my profession and the sense of vocation it has given me. I told him on the spot that I was offended by such a comparison, and I have talked to him only once since.

Early on in my career in academic settings I found the medical research and investigation process to be corrupt. The salaries that attending physicians receive from research grants from the government (NIH/CDC/DOD etc.) far outweigh the income they receive in treating patients. The symbiotic relationship between government, drug companies and clinicians has hurt patient care. As more and more clinicians see the opportunity for making lots of money in non-patient care activities, they leave the clinical practice of medicine to younger and less experienced practitioners. We also see the pressure of “publish or perish” creating incredibly terrible research. This has been commented upon by experts in all fields of science—physics, chemistry, engineering in Journals like Scientific American, Lancet, The New England Journal of Medicine(NEJM), and the Journal of the American College of Surgeons.

Interestingly in my opinion these very publications are the practitioners of the most egregious abuses like having editors review their own articles. The Covid-19 brought out the ineptness of the medical establishment’s ability to promulgate scientific information via the Academy—Periodical—to the clinician process. Remember how both the NEJM and the Lancet had to retract articles about the efficacy of hydroxychloroquine in the treatment of Covid-19 after it was revealed by a lay journalist that they had used the same vendor-coalesce to harvest data from government sources. The millions of data points were never critically analyzed by professionals prior to releasing of information and the company responsible for this “research evaluation” has since declared bankruptcy. Practitioners communicating via E-Mail and Facebook circumvented the government and academic bureaucracy and saved many lives.

One of the problems I believe in the physician community is that the process of educating a doctor continues to be so basic science oriented that the last course many of us get to ever take in ethics, theology or political philosophy, is in our Parish or high schools. I believe all physicians should have a STEM major but be required to take a CORE number of humanity classes—CRT and gender studies not included. Very few physicians have a basic understanding of philosophy, economics, or even the history of their own scientific disciplines. This creates a void when they try to understand and integrate their own profession and how it relates to the outside world (politics).

I recently wrote an opinion for the Bulletin of the American College of Surgeons that was not well received by my colleagues. Their stated premise that the difference between outcomes of Covid-19 hospitalized patients was because Black patients were discriminated against didn’t make sense to me.

I know of a Black Colleague of mine in Seattle who was in the hospital for 14 days—3 in the ICU, who received excellent care and is recovering. Early intervention saved his life. I know of many White homeless people in Seattle who didn’t receive such care who died. One of my college football teammates who is Black has been in the Cleveland Clinic for 3 months diagnosed with Covid-19 and bronchial pneumonia. Sheldon has received state of the art care and will survive God willing, but many people living on the streets in Cleveland of all races and ethnicities have not received the care that he has been blessed to have.

The political left has used race as a wedge. By creating conflict between groups of people they have pitted us against each other which serves their purpose of dividing and conquering. What physician groups, the media, and their Marxist Progressive operatives fail to acknowledge is that the problem to access of care is mostly a problem of poverty—not race or ethnicity. Many of those making such a claim have left the clinical practice of medicine for easier jobs that pay more. They could be part of the fix if they got back into the game themselves. What is also never said about poverty and access to medical care in our country is that poverty is decreasing at a rapid rate amongst all ethnic groups in the USA. The reference at the end of this article contains a graph showing that poverty levels in the USA have been going down very quickly. Please note how the years 2016-2020 have gone down. I could argue that the economic policies of the Trump administration have done more to provide access to medical care than anything the ACA has done. Look at the graph.

Here are the facts to support my point that race is not the problem regarding access or quality of care. These points have nothing to do with the delivery or quality of care and when I show these numbers to my physician friends, they are almost uniformly surprised.

We begin by saying that we have 300 million people living in our country that we can account for—the total number is more like 360 but the fluidity and lack of documentation in our immigration system makes following a large number of people—60million difficult.

White people make up 60% of our population= 180 million people

Black people who have immigrated make up 5-7%

16% of Latinos live in poverty=8million people.

Comparing outcomes from Covid-19 patients also requires comparing co-morbid contributions to morbidity and mortality—obesity, high blood pressure, diabetes, and immune compromised status of patients within the group. If a higher percentage of co-morbid factors occurs within one group is the group’s race or shared comorbidity the problem? Once the libs hear this argument their response uniformly is that race is the cause of the co-morbidity—an argument that has never been proven—there are fat and skinny people in all races are there not?

In the end, any arguments by the medical community that equate disparities to discrimination are fallacious and without bases. By blaming race, we are pitting people against each other. We aren’t working together. The best way to improve access to medical care in our country is to continue to encourage policies that decrease poverty.

Far more White people are living under conditions of poverty than any other race. We are all created in God’s image and because of that fact alone we should all be treated equally. Access to medical care, access to the justice system, access to education, access to a job, are all impacted primarily by conditions of poverty. We should all know that poverty is a common problem and that it has common solutions—look at the graph at the end of this article. By dividing us and taking our focus away from the problem the left is taking us away from finding new and even better solutions to the real problem—poverty. 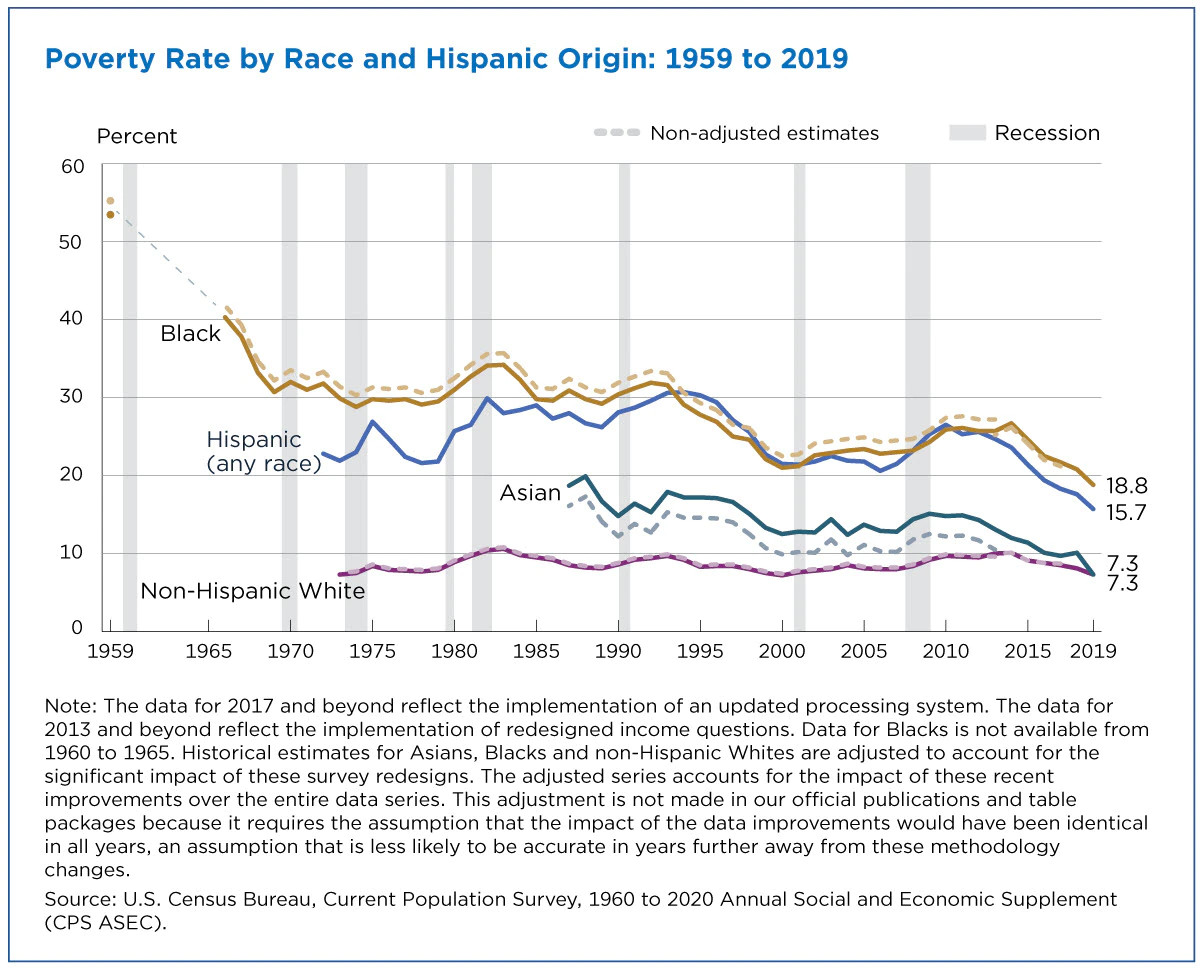 One reply on “Race and Poverty”

Great article, I believe we could help those in poverty stricken areas by establishing that new physicians be encouraged to serve 6-8 month internship in a locally affected area of their chosen education location.