Swamp Draining 101 should dictate the necessary removal of the primary roadblocks to getting meaningful, lasting legislation accomplished in Congress as sure as a blockage must be removed to make a fuel line function.

House Speaker Paul Ryan and Senate Majority Leader Mitch McConnell are obstructionists from the get go.

Both are seasoned professionals who knowledgeably command their domains and have developed into masters of obfuscation at the behest of The Council on Foreign Relations (CFR).

(“It is through this front group, called the Council on Foreign Relations, and its influence over the media, tax-exempt foundations, universities, and government agencies that the international financiers have been able to dominate the domestic and foreign policies of the United States ever since.” – G. Edward Griffin /The Creature From Jekyll Island)

AHCA: RYAN’S “LIPSTICK ON A PIG”

As I explained in my article on Ryan in Swamp Osmosis, early on I admired him and wanted to see him do well. But he has obviously proven to have been influentially absorbed into the establishment’s plans for our future.

Alex Newman of The New American.com reported that the American Health Care Act (AHCA) bill in the House “does cut back some of the taxes imposed under ObamaCare. But despite deceptive coverage of the bill by much of the establishment media, which went along with the ruse that the AHCA repeals ObamaCare, the legislation actually keeps huge swaths of the unconstitutional statute in place. For instance, under the GOP version of ObamaCare, most of ObamaCare’s regulations, mandates, decrees, and meddling are kept firmly in place. It keeps subsidies for insurance, and penalties for not having it, but changes a few relatively minor elements. While the bill purports to “allow” states to “apply” for waivers from some mandates, the legislation simply requires that states create what critics slammed as “mini-ObamaCare” schemes at the state level to obtain the exemptions.”

Campaign for Liberty President Norm Singleton warned, “If Paul Ryan succeeds in retaining and renewing ObamaCare, we may not get another chance to repeal ObamaCare — at least not before the government’s interference causes the health care system to collapse,” suggesting the GOP would now get the blame for the looming crisis in healthcare.

‘FOUR EYES’ McCONNELL SEES WHAT HE WANTS TO SEE

Currently, the best example of why Mitch McConnell needs to go is the obvious reason that he is only seeing what he wants to see as if he has an extra set of eyes that sees only what he’s ‘programmed’ to see.

Trump suggested last week after reportedly being persuaded in a meeting with Rand Paul that the Senate could change course to vote to repeal ObamaCare and then replace it later if the current GOP bill fails. Some Senate Republicans appeared to be warming to this idea last week. But McConnell steadfastly said last week the Senate will continue to pursue a joint repeal and replacement of ObamaCare. It appears he is adamant about keeping the government’s tentacles deeply entrenched just as Paul Ryan is. We’re “trying to figure out how to twist the dials to get to 50 to replace this with something better,” he said. 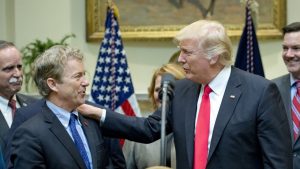 Isn’t it amazing that Congress campaigned and wrote bill after bill for seven years to repeal ObamaCare, and now when it’s so easily possible, McConnell refuses to consider it? And now he’s talking about bolstering the ObamaCare exchanges. It is nonsensical! McConnell even says now, that if he can’t work with Republicans, he’ll work with Democrats, thusly showing his hand. He is not in Trump’s camp, he is in the camp of the CFR controlled establishment.

Kenneth Gold, Director of the Government Affairs Institute stated on their website during Speaker Boehner’s tenure: “Raising the question of whether a sitting Speaker can be removed from office, the answer is it’s not clear, and it’s never been done.

“Article 1, Section 2 of the Constitution establishes the position, and states that “The House of Representatives shall choose their Speaker and other officers; and shall have the sole power of impeachment.” Neither the Constitution nor the rules of the 113th Congress state anything specific about removing the Speaker.

“The Jefferson Manual, written by Thomas Jefferson when he was Vice President, and used by the House as a supplement to its standing rules, in Section 9 states that “A Speaker may be removed at the will of the House and a Speaker pro tempore appointed.” But even that clause may not necessarily apply to removing a Speaker, as it follows examples of Speakers being replaced due to illness, and the appointing of Speakers pro tempore in those instances.

“Nevertheless, it’s generally believed that a Speaker can be removed, which would be executed by a Member offering a resolution declaring the Office of the Speaker vacant. Such a resolution would be considered a question of constitutional privilege, and therefore a privileged motion, although again, it’s never been done. So the answer is there is no explicit procedure for removing a Speaker either in the Constitution or in the Rules of the House of Representatives for the 113th Congress.” Where there is a will, there is a way and the will should be begging in both houses because the GOP must do or die! Angry citizens need threatening political futures for non-performance.

Chris Mooney at Slate.com says the Senate Republican Caucus, an informal body composed of GOP senators elects the party’s Senate leadership—majority leader, whip, etc.—every two years, right after the November elections. But it needn’t wait that long. Conceivably, the caucus could reopen the leadership matter with a simple majority vote.

Since ObamaCare is neither good economics nor good politics (the Democrats have lost both houses of Congress and the White House since its passage), it should be easy to vote according to the Constitution and really repeal ObamaCare.

Ryan and McConnell need to go, so President Trump can get on with accomplishing what America wants him to complete! This golden opportunity to attain much with both houses, and the executive branch is demanding for goals to be achieved, not stalled endlessly. Enough with the smooshing. Senators and Representatives must stand up with patriotic zeal and tell the establishment puppets, Ryan and McConnell in clarion tones, the words made famous by President Trump: You’re fired! – See: * It’s Time to Remove and Replace Paul Ryan, * Time to replace Paul Ryan as House speaker and * Ex-Trump adviser: Ryan should be replaced if he can’t execute on ObamaCare