We have dreams too. Only one man heard our dreams. And that’s why Donald J. Trump is President.

Trump’s message won over white middle-class Americans. Trump heard us. And when Trump spoke, we heard him. The hair stood up on the back of our arms.

But now it’s time for Trump and the GOP to go after a different group of legal American-born citizens. Minorities. Black Americans. Hispanic Americans.

This is President Trump’s chance to re-make the GOP, re-make American politics and re-make the future.

For years Democrats have relied on racist “identity politics” to divide the nation and win elections. Supported by the biased-liberal mainstream media they have lied to minority groups—specifically African-Americans and Hispanics—saying Democrats are here to help them. The truth is exactly the opposite.

The Democrat Party’s true goal is to keep these groups poor, helpless and dependent, to ensure they will always vote Democrat. What’s the proof? Try these four words…

There are many more examples of big city blight. But these four stand out above all others. The poverty. Welfare dependence. Violent crime. Drugs. Teen pregnancy. The public education systems in ruins. The good people trapped in their homes at night like a prison cell. These cities are America’s “No Go” zones.

What do these cities have in common (besides misery)? They’ve all been controlled 100% by Democrats for decades.

Look at the results of unfettered Democrat policies: The people live in misery. These cities are disaster areas. Hiroshima looks far better than inner-city Detroit. Nagasaki is far safer than inner city Chicago. Democrat policies rival nuclear weapons for the damage they do future generations.

Sadly, the Democrats have achieved EXACTLY what they wanted: poor, dependent, minority voters convinced they have no chance to achieve the American Dream… because white Republicans hate them and purposely hold them back. 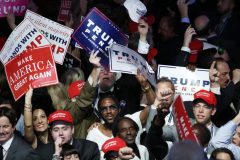 There is a second part to this message Democrats have been sending for decades: Since minorities have no hope of getting ahead, their only hope is settling for a welfare check, food stamps, and lots of free stuff from government. And only the Democrat Party will provide it.

No one in their communities or the liberal mainstream media ever dares to tell them the truth: It’s Democrat politicians and Democrat policies that put you… and keep you living in misery, without hope.

It is time for the Republican Party to stand up and go directly to African-Americans and Hispanics. It is time to attack the lies the Democrats keep telling and the disastrous policies they have implemented. It’s time to tell them the truth: Democrats don’t care about you, they only care about your vote!

When President Trump says he is looking out for “America First”—HE MEANS YOU! He is on your side… not the side of illegal immigrants looking to take your job or keep your wages low.

Don’t legal, American-born, black and Hispanic citizens have dreams too? If they want a better job and higher wages for themselves and their families, the answer is VOTE Republican… we’re on your side. We’re the party of American Dreamers.

And as a bonus, the math is great for winning elections. This strategy blows away “getting out the Republican vote.” With this strategy, you actually gain two votes… one vote for the GOP and one less vote for Democrats.

The latest polls show Trump is back to almost 50% approval. He won the 2016 election with 46% approval. He is winning big in those same polls on the all-important issues of jobs, economy, and taxes. The Generic Congressional Ballot poll shows the GOP has gone from 18 points down to 1 point ahead as of this week. Everything is coming up roses for Trump and the GOP.