Obama’s newest land grab of 1.65 million acres in Utah and Nevada have been declared as National Monuments bringing his total to now 553 million acres which have been repurposed by using the 1906 Antiquities Act.

The Antiquities Act was passed at the urging of progressive Republican President Theodore Roosevelt, a strong believer not only in government taking over private land “to conserve it,” but also in increasing the power of the president.

While Franklin Roosevelt used the law to limit use of land in the West, the most during his 12 years in office, Obama has taken the most land: 553 million acres. This latest action is the 29th time Obama has used the power to create national monuments which impose the strictest of federal restrictions.

Back in February 2016, the website, Whitehouse.gov boasted: “Find Your Park — America’s Newest National Monuments — President Obama designated three new national monuments in the California desert. He has now protected more land and water than any president in history.” 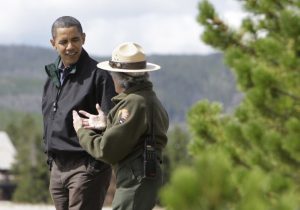 In true uber-leftist fashion, Vacationer-in-Chief Barack Obama has grabbed more state land for the federal government from his perch in Hawaii.

According to the article ‘Obama’s Massive Land Grab: 553 Million Acres for ‘Conservation’ I note that Obama has gone beyond declaring Federally held lands as National monuments and has now tapped into State government lands. This should all be questioned by our Congress. There should be a way to override the right of a President, without oversight, to lock up vast tracts of land in perpetuity through the Antiquities Act. Has it never been challenged before????? It is time we the people should do so. I entered a condensed version of this on Facebook as follows:

“If Obama is adding 553 million acres to conservation lands already held by government and taken out of productive use, there is reason for real concern. According to 2014 Land Ownership data, the federal government already owns and manages roughly 640 million acres of the 2.27 billion acres of land in the entire United States.

“The bulk of this land is under control of the following four major agencies: Bureau of Land Management 247 million, Forest Service 193 million, Fish and Wildlife 89 million, and National Park Service 80 million acres.

“Ever increasing lock-up of government lands have inflicted severe restrictions on our minerals, timber harvest, oil and gas production and even our watersheds. Well intended but lacking in knowledgeable this has led to poor management of these lands, often even destructive to the environment and wildlife contained. It has resulted in dead, dying and burning forests, imbalance of species, erosion of our economy and quality of life. Under our new administration, these federal agencies need to take a close look at the established policies and operations over the past twenty years. ”

The federal government owns roughly 640 million acres, about 28% of the 2.27 billion acres of land in the United States.

The lands administered by the four land agencies are managed for many purposes, primarily related to preservation, recreation, and development of natural resources. Yet each of these agencies has distinct responsibilities.

The BLM manages 247.3 million acres of public land and (in addition) administers about 700 million acres of federal subsurface mineral estate throughout the nation. The BLM has a multiple-use, sustained-yield mandate that supports a variety of uses and programs, including energy development, recreation, grazing, wild horses and burros, and conservation.

The USFS manages 192.9 million acres also for multiple uses and sustained yields of various products and services, including timber harvesting, recreation, grazing, watershed protection, and fish and wildlife habitats. Most of the FS lands are designated national forests. Wildfire protection is increasingly important for both agencies.

The NPS manages 79.6 million acres in 401 diverse units to conserve lands and resources and make them available for public use. Activities that harvest or remove resources generally are prohibited.

Federal land ownership is concentrated in the West. Specifically, 61.2% of Alaska is federally owned, as is 46.9% of the 11 coterminous western states. By contrast, the federal government owns 4.0% of lands in the other states. This western concentration has contributed to a higher degree of controversy over land ownership and use in that part of the country.

Throughout America’s history, federal land laws have reflected two visions: keeping some lands in federal ownership while disposing of others. From the earliest days, there has been conflict between these two visions. During the 19th century, many laws encouraged settlement of the West through federal land disposal. Mostly in the 20th century, emphasis shifted to retention of federal lands. Congress has provided varying land acquisition and disposal authorities to the agencies, ranging from restricted to broad. As a result of acquisitions and disposals, federal land ownership by the five agencies has declined by 23.5 million acres since 1990, from 646.9 million acres to 623.3 million acres. Much of the decline is attributable to BLM land disposals in Alaska and also reductions in DOD land.

Numerous issues affecting federal land management are before Congress. They include the extent of federal ownership, and whether to decrease, maintain, or increase the amount of federal holdings; the condition of currently owned federal infrastructure and lands, and the priority of their maintenance versus new acquisitions; the optimal balance between land use and protection, and whether federal lands should be managed primarily to benefit the nation as a whole or instead to benefit the localities and states; and border control on federal lands along the southwest border.