“The nuclear option (or constitutional option) is a parliamentary procedure that allows the United States Senate to override a rule – specifically the 60-vote rule to close debate – by a simple majority of 51 votes, rather than the two-thirds supermajority normally required to amend the rules. The option is invoked when the majority leader raises a point of order that only a simple majority is needed to close debate on certain matters. The presiding officer denies the point of order based on Senate rules, but the ruling of the chair is then appealed and overturned by majority vote, establishing new precedent.

“This procedure effectively allows the Senate to decide any issue by simple majority vote, regardless of existing procedural rules such as Rule XXII which requires the consent of 60 senators (out of 100) to end a filibuster for legislation, and 67 for amending a Senate rule. The term “nuclear option” is an analogy to nuclear weapons being the most extreme option in warfare.

WE NUKED ‘EM ONCE, AND IT WAS GOOD, NOW MAKE ‘EM SPARKLE

Mitch McConnell eventually justified invoking the nuclear option for placing Neil Gorsuch on the Supreme Court. By now he needs recognizing a hard reality in his chamber going forward. Obstructionism and demands for unlawful open borders, chain migration and citizenship for DACA children are the Dimms’ inflexible, and only mantra. Waiting for them to come around is foolish. We should not be held captive by these irredeemable Democrats.

If McConnell cannot bring himself to enact such a bold move then I say he is doing the bidding of the establishment as I have stated in the past and it is time for him to exit. There is too much important work that must be accomplished to right America NOW!, especially since we finally have a real patriot in the presidency who wants to drain the swamp, restore our freedoms and our accountability to our Constitution on behalf of the citizen owners of our republic.

Much can be accomplished in America with a house and senate that follow the GOP Platform and the Constitution working with our driven, effective ‘perfect President for our times,’ whom we’ve been blessed to have arrive just in time to steer America away from the fateful path we have been on.

LET NOT THE DIMMS FOOL US AGAIN

States Steve Byas of TheNewAmerican.com, “Americans have long been aware of the high fiscal costs of illegal immigration, but those who argue that this surge of illegal immigration is somehow good for the country have often countered that illegal aliens pay taxes to all levels of government, off-setting these outlays. But FAIR’s report ably refuted that argument, demonstrating that illegal aliens pay about $19 billion in taxes, resulting in an overall net loss to the taxpayer of $116 billion.

“What is particularly perverse about this situation is that state and local governments bear most of the burden, while the federal government collects the most in taxes!

Let’s face facts. DACA is not really about the children. Talking about the children is the age-old ploy of attorneys encouraging clients to appeal to the righteous motives of the jury. No, in fact, most of these DACA ‘children are now grown into something called young adults out on their own, or so they should be soon. Actually, this is about one thing. Votes. Like in quid pro quo. And mostly it is a total waste of money, especially when you discover that they get more in benefits that do American families. Money that needs to be spent on much else, like… the wall.

Legal immigrants don’t get such handouts. Dreamers need to buck up and be glad they are still here. Period. In time they should be steered back from whence they came, grateful that they had their experience of living in America. Maybe they can make a difference back home with the benefit of that experience. Point of fact: We just cannot take in everybody that wants to come to America!!!

They can always apply for legal entry, perhaps with a favorable recognition of their time spent here. That would be a worthy program for Congress to consider after much more important business is completed. Like, again… the wall being built. Building the wall makes sense, is accountable and in keeping with our Constitution’s position on national security while practically stopping the surge of illegal immigration and drugs flowing into America.

DIMMS & RINOS TODAY ARE UP TO NOTHING PATRIOTIC 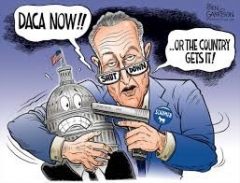 Americans who are not naïve, or asleep at the switch Democrats following their socialist leaderships’ path toward a one world government, in lock-step with their comrade RINO republicans like Lyndsey Graham and John McCain, need recognizing that all the Dimms’ socialists programs are coming home to roost with all their killer costs overburdening our budget. Dimms have nothing left to work with but pressing for their ‘for the good of the children’ scheme, diversion and obstruction.

Without the extra votes they could corral from DACA, (not the touted 800,000 Dreamers they speak of, but more likely over 3.6 million Dreamers), they and their supportive buds in the ‘fake news,’ mainstream media basically are toast. That is until our older generation has died off and is replaced by the new crop of millennials brought up on Common Core and propaganda from sorry socialist professors at schools of higher learning. This trend should keep us up at night with concern.

God willing, perhaps enough of us can find ways to educate them and get them to inform others about reality and the actual benefits of our Constitution when citizens follow it and apply themselves with the freedoms we enjoy. If you know some of these people who want to believe in this socialist tripe, encourage them to check out the website: SocialismToday.info for a pretty thorough debunking of socialism today.

The Democrat Party is not the party they once were. They have been hijacked by very extreme lefty liberals now called ‘Progressives,’ (sounds better than socialists I suppose) which always had socialism as their main attraction, ‘something for nothing for votes.’ They have had a lot of very good people buy into to their many ‘do-gooder’ programs including a lot of friends of mine as well as family members.

Most of my friends and family just never thought through the math and reality of things, instead choosing to accept that the folks they wanted to believe in were straight up and correct. They naively bought and buy into too many well prepared and well-presented freebie pitches promising panacea by politicians not following the Constitution. All that said, doesn’t even deal with the outrageous onslaught against America by Obama.

The Dimms today should be acknowledged for what they are, con artists. They are wasting our precious time with very dangerous nonsense. America must move on. There is way too much that is vitally important for us to accomplish ASAP.

We need to either Nuke ’em on-going or ditch Mitch and replace him with a leader that will. Remember the GOP didn’t start the nuclear option. Democrats can thank Harry Reid for it. So now they need getting what they gave. In spades.