If there were only two important lessons that I could impart to my fellow man, it would be that, A) Nothing is ever what it seems on the surface, and B) Follow the money.

Have you ever wondered why we can’t get a conservative agenda through the Idaho Legislature when it is made up of 80% Republicans?

Following the money is probably the most important concept in politics. Fortunately for voters, the State of Idaho has what is called a Sunshine Law. The Sunshine Law requires every politician, political action committee (PAC) and candidate to disclose all contributions they receive and all expenditures that they make.

Sunshine truly is the best medicine.

On July 6th, I launched a website at www.pactrack.org. The purpose of the website was to allow people to easily trace political campaign funding – specifically, the money given by PACs and corporations to politicians.

Here are some interesting figures, representing total contributions to politicians and political causes from notable corporations and PACs in Idaho from 2009 thru 2014.

According to an article at ThinkProgress.org, the insurance industry stands to cash in on a $200 billion windfall from Obamacare exchanges by 2019. Is it any wonder that Blue Cross of Idaho spent over $200,000 on campaign contributions and lobbied heavily for the so-called State Health Care Exchange in Idaho? Have you ever wondered why Idaho was the only Republican controlled state to voluntarily implement Obamacare?

If the politicians weren’t selling, no one would be buying.

“Name That PAC” is a shell game that politicians and PACs play in order to obfuscate their funding sources. They shuttle money back and forth between other PACs and front organizations to cover their trail and they are very successful at it.

Understanding how the money flows is key to understanding the agenda of the Left and who their allies and operatives are.

Since the launch of PACTrack, there have also been some startling revelations of treason from inside the Republican Party. Some among the Republican Party leadership are using Democratically funded PACs to target and defeat conservative legislators.

The letter below was mailed prior to the May, 2016 Republican Legislative Primary election by Marsha Bjorn of Rexburg, Idaho, in support of candidate Doug Ricks. According to the Madison County GOP website, Marsha Bjornn is the current state central committeewoman for Madison County. In the letter, Bjornn urges her readers to vote for Doug Ricks, a challenger to incumbent Representative Ronald Nate, whom I know to be a rock solid, liberty-minded conservative. Rep. Nate earned an A+ from the Idaho Freedom Foundation in 2016. 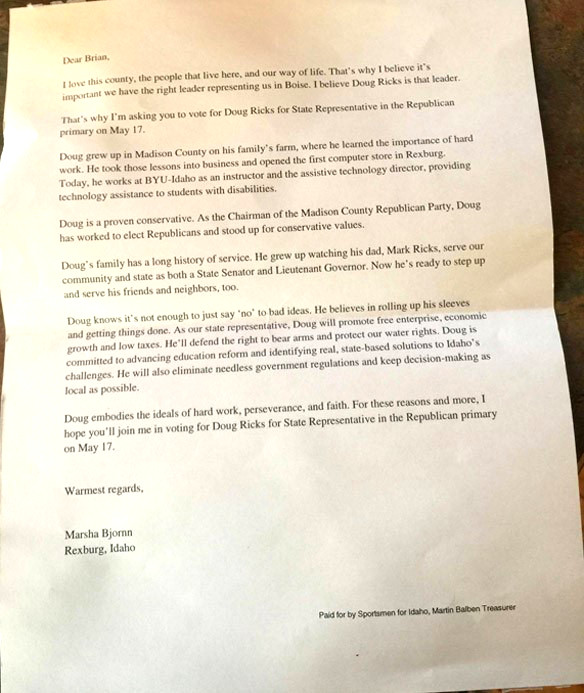 The mailing states clearly that it was paid for by a PAC named Sportsmen For Idaho (SFI).

One might think that a group named Sportsmen For Idaho would be in support of issues like hunting, camping, off-roading, 2nd Amendment rights, etc. – those things that all of the sportsmen I know support and defend. However, using PACTrack to trace where SFI gets their money reveals a different agenda.

In 2014, SFI received $59,605 – 100% of its funding – from another PAC named Conservation Voters For Idaho (CVI). CVI is a radical environmental group dedicated to causes in direct opposition to the interests of sportsmen, off-roaders or 2nd Amendment advocates, despite what their website states. Following the money through CVI, we find that CVI receives some of its money from other PACs, three of which are listed here:

Sportsmen For Idaho has no office. It’s official address is a PO Box in Boise. It has no website. It is a false front organization designed to do one thing: confuse Idaho voters.

Marsha Bjornn, an established leader on the Idaho Republican Central Committee, has united with radical Leftist organizations, Democrats and other Republicans In Name Only (RINOs) to undermine conservatives in the Idaho Legislature and defraud Republican voters. The proof is irrefutable.

To make matters worse, Marsha Bjornn is supported in her efforts by none other than Idaho GOP Chairman, Steve Yates and Executive Director, David Johnston.

I posted this information (PACTrack.org News Page) to Steve Yates’ Facebook page, asking for an explanation. Within hours my post was removed and I was banned from Yates’ Facebook page. Each and every time I bring these issues to the attention of Executive Director, David Johnston, he deletes my notifications.

The Idaho GOP is not your parents’ GOP. While there are some great Republican candidates and legislators, The GOP has been infiltrated at the highest levels by liberals who have discovered the tactical wisdom behind the old adage, “if you can’t beat ’em, join ’em.”

In Idaho, the Democratic Party is insignificant. Listening to the Republican Party Leadership insist that we need to elect more Republicans to get anything accomplished is laughable. If we can’t get a conservative agenda through a Legislature that is 80% Republican, the Republicans are either, A) Not RepublIcans at all, B) Bought and paid for, C) The most incompetent group of people on the planet or D) All of he above.

You now have the proof and the means to easily trace the money for yourself. If you remain convinced that the Republican Party Leadership is an ally of conservatives, I have some ocean-front property in Nebraska for you.

Ken De Vries is an independent candidate for the Idaho House of Representatives, District 5 Seat B. De Vries, is a software consultant by profession and is the founder of PACTrack.org. He is a proud homeschooling parent and father of three young gentlemen. He resides in Benewah County with his wife of 29 years, Yvonne. Ken can be reached at 208.245.5041 or email: kendevriesidaho@gmail.com.

Op-Ed: Why Red Wave Radio Show Should Raise a Red Flag with Conservatives