It’s New Year’s 2018. Let’s take a moment to celebrate a great start to the New Year. President Trump has turned a “horrid Obama economy” into a “torrid Trump economy.”

We are experiencing one of the greatest economic turnarounds in history. No one expected a rebound this huge, this quickly. Christmas retail sales just set all-time records. Thank you, President Trump.

The just-passed Trump tax law should accelerate this fabulous “Trump Economic Miracle.” I predict this will be the biggest story of 2018.

President Trump has made enormous strides turning this country around. Now it’s time to close the deal. “Draining the DC Swamp” is at the top of my New Year wishes. Here are a few actions President Trump should take in 2018 to “Make America Great Again.” 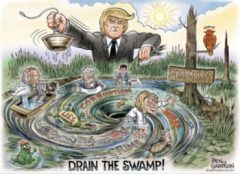 What’s good for the goose is good for the gander. I’ve recommended this specific strategy in my newspaper columns and on my national radio and TV shows for months now. If it’s okay for Democrats to demand Special Counselors to investigate President Trump, then it’s perfectly fine, legal and fair for President Trump’s Attorney General to appoint Special Counselors to investigate every Democrat scandal.

This is the perfect game plan to accelerate the process of “Draining the DC Swamp”…defending the rule of law… returning accountability and credibility to our government…returning power to the American people (just as our Founding Fathers intended)…and “Making America Great Again.” That’s what I call a Happy New Year!