Nampa citizens recently passed a bond that will pay for upgrades to its wastewater system. The bond authorizes funding up to $165 million dollars with an average sewer rate increase of 16.75% each year over the next 7 years, with “… totals of $279.2M in capital investments between 2018 and 2040.”, a fact that was not brought forth to the public.

This upgrade requirement is from the Idaho Department of Environmental Quality (IDEQ) which descends from the Environmental Protection Agency (EPA). As with all other issues going on now, the federal government forces their policies into state policies, in this case, it is called state “primacy“, by developing “statutes and regulations that are at least as stringent as the federal acts and regulations.” which IDEQ did. On June 5, 2018, the EPA officially turned water pollution regulation over to Idaho. This agenda for phosphorous reduction is being implemented in many Idaho cities.

The alleged “threat” is all that dang phosphorous being released into Indian Creek from the Nampa Wastewater Treatment Plant (NWWTP), and concurrent increased temperature from the waste. The EPA is demanding these same upgrades are made in cities across the U.S. based on the Clean Water Act (CWA). IDEQ claims that Indian Creek qualifies for such action because it is a natural stream, therefore falling under the category of a navigable water, which allows them to require the upgraded plant. However, that may not be true.

According to this 2015 document, A History of the Nampa & Meridian Irrigation District, in 1915 Reclamation Service engineers were contracted to “… construct a system of 11 deep surface drains…”, one of which included Indian Creek. The construction was on “…ephemeral creeks…” which means they were intermittent, filling with water after the snowmelt, then becoming dry (pg 7, 10). Because of this man-made construction, the water in Indian Creek is artificially manipulated into a drain. Most of the Indian Creek channel is a natural watershed drainage that has developed over a long period of time and is actually an agricultural drain. If Indian Creek was reverted back to its original state from being a drain, it would once again become ephemeral, and not a stream as IDEQ claims.

One of the benefits from NWWTP releasing the treated wastewater into Indian Creek is the phosphorus. As an element of an irrigation system, Indian Creek provides irrigation to our local farmers. Plants thrive on phosphorous. By the end of the irrigation season, all of that phosphorous has been used by agriculture and none of it ends up in the Boise River, as IDEQ claims. This “reuse” of wastewater thus complies with IDEQ promotion of reusing wastewater for other benefits.

Ron Harriman wrote an excellent article that explains the dynamics of Indian Creek and why it should be classified as an agricultural drain, not a stream, and more details about the issue. 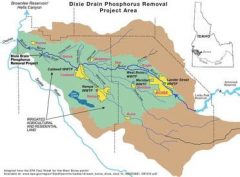 Discharge from the NWWTP contains phosphorous, an agricultural nutrient, and flows into Indian Creek. The last irrigation district is Riverside, which utilizes all the water from Indian Creek during the 7-8 month irrigation season, leaving 4-8 CFS (rate of flow) of phosphorous-free water draining into the Snake River. In the remaining 5 winter months, the water flows into the Boise River but is still in compliance for temperature and phosphorous. Water flow continues on to the Brownlee Reservoir which is protected from phosphorus by its removal during passage of water through the Riverside irrigation system. 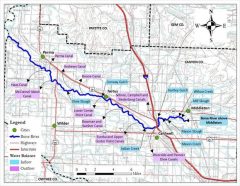 At issue also is the water temperature which IDEQ claims should be 55.4F with a maximum of 71.6 for healthy salmonoid spawning. However, it has been shown that the primary cause of the rise in water temperature is from solar heating, not from the NWWTP. Spawning begins in March when the water is coolest, which is unrelated to the NWWTP, however, IDEQ believes spawning is affected by the water discharge temperature. Water from the Wilson Drain is at 59 F year round, and the seepage is from 52-56 F. making the overall temperature somewhere in the middle. Further details can be found in the Harriman report.

Another aspect of this project is restoration. IDEQ is required to “restore” degraded waters as found under the Clean Water Act (CWA). How can an agricultural drain be restored to something it never was? The reason for constructing Indian Creek into a drainage system was damage caused from spring runoffs and previously built irrigation systems. As irrigation systems expanded in the early 1900’s, stagnant pools of swamp water from water continually being applied to farmlands ruined thousands of acres of farmland (Pg 7). Alkali also invaded the seeped lands destroying plant life. To solve the problem engineers designed “… a drainage system that would dig deeper into the land’s natural depressions to relieve these excess flows and direct them back to the Boise River.” Water was diverted for the purposes of drainage. Since Indian Creek was never a water body that supported aquatic life, there is nothing to restore other than reverting it back to a field of stagnant water. IDAPA 58.01.02.200.06 states, “Surface waters of the state shall be free from excess nutrients that can cause visible slime growths or other nuisance aquatic growths impairing designated beneficial uses”. Clearly, Indian Creek would violate this regulation if restored to its beginning.

There are several points why the NWWTP upgrades should not occur:

Nampa citizens are being asked to fund a project that should not go forward. Many issues have not been addressed regarding Indian Creek and it is the responsibility of the Nampa Council and Mayor to fully address them. IDEQ is also accountable to Nampa citizens and should immediately require further investigation into the origins of Indian Creek for reclassification. An Environmental Information Document (EID) is being created by the contracted construction company, Brown & Caldwell. The EID is a basic assessment of potential impacts on a project similar to an Environmental Assessment. There are significant impacts with this project including the long-term costs to citizens, phosphorous reduction impacts on agriculture, and money being used to restore a stream that never existed. Contact the Mayor and IDEQ, let them know you want these issues addressed before any further action is taken on this project. For more technical details read the Harriman and Olmsted reports.