Above: Ed Medina Jr., owner of A Better Way Medicinal Alternatives, speaks out in support of legal recreational marijuana sales and regulation in Klamath Falls at city council Monday, Aug. 6.

— Published with Permission of HeraldandNews.com —

Editor’s note: This is part of an ongoing series of articles regarding the upcoming ballot measure to sell recreational cannabis in Klamath Falls.

The illegal marijuana black market is alive and well in Klamath County, according to both officials in the Klamath County Sheriff’s Office and proponents of commercial recreational marijuana legalization like businessman Ed Medina Jr.

Regardless of their opinions on commercial legalization, law enforcement and Medina have important insights into how the marijuana black market operates now, and how it could change under different laws.

The Herald and News wanted to know: how could legalized commercial recreational marijuana distribution in Klamath Falls or Klamath County affect its black market sales — both within the area and out of state— and thus, law enforcement’s response to it? If recreational distribution were legalized, would sheriff’s deputies still make illegal grow arrests and seizures?

Conversations with the sheriff’s department, Oregon State Police, the Oregon Liquor Control Commission and Medina, who owns the medical marijuana shop A Better Way Medicinal Alternatives, revealed a common thread: one’s view on the future of the black market under different commercial laws is often tied to one’s particular stake in it. 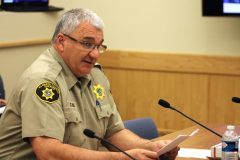 “It just depends where you fall on the spectrum,” Sheriff Chris Kaber said. “How much work does this change put on your desk? How much money is this putting in your pocket? I guess that clouds, or at least informs your opinion.”

Duval, assigned to work on illegal grow enforcement this summer, has gotten 50 calls about marijuana grows just in the last month, he said. Deputies have only been able to respond and issue citations for eight illegal growers so far: five with warrants, three without.

Of these eight illegal grows, two have revealed connections to out-of-state illegal markets. Duval suspects that one couple he cited grows marijuana here in the summer, then takes it to their home-state of California to sell.

Another Chiloquin illegal grower was discovered when an Illinois state agency intercepted his two-pound package of marijuana, and identified other packages of money being sent back to him.

Barden, whose work mostly revolves around intercepting meth and heroin distribution in Klamath County, said OSP only gets involved in illegal marijuana enforcement when it’s tied to particularly egregious out-of-state markets, or other drug sales. Agencies such as the Drug Enforcement Agency and Homeland Security contact OSP to trace illegal marijuana back to Klamath County growers.

Oregon is one of the top states for illegal marijuana black market sales, Barden said — rural, relatively private land is cheap here, and marijuana can logically sell for much more in places where it’s completely illegal.

“A pound of marijuana here you could get for anywhere from $500 to $1,000,” he said. “In the states where it’s illegal, it could be worth upwards of three to four thousand dollars.”

Duval and Barden share similar views on how commercial legalization would affect the marijuana black market.

“It’s kind of a double-edged sword: in some ways, it would minimize the black market sales of marijuana in our area, but that’s not where most of that marijuana goes anyways,” Barden said.

“As far as illegal growing, the black market going to the East Coast where it’s illegal, exporting it out of the state — I don’t think it would hugely change that.”

“If we allow the recreational marijuana grow sites in Klamath County, then more people are gonna be growing marijuana, which is going to increase the opportunity for out-of-state buyers to purchase it,” Duval said. “Now, it’s fairly easy to identity whether or not a grow is legal or illegal. It’s more difficult to identity what they’re doing with the product once it’s cultivated.”

Medina, who said he interacts with illegal growers and sellers on a regular basis, doesn’t think so. From his experience in the industry, illegal growers who ship product out of state are vehemently opposed to recreational legalization in Klamath County.

“They are some of our biggest opponents to legalization,” Medina said. “They certainly don’t want OLCC inspectors driving around and looking for illegal grows. They’re gonna be a lot more careful about what they’re doing if we have enforcement happening in this county.”

Now, and in the foreseeable future, the enforcement of illegal grows will fall mostly on the sheriff’s office, officials said. But if recreational commercial distribution were legal in the county, that responsibility would be somewhat shared with the Oregon Liquor Control Commission.

OLCC is charged with licensing and overseeing all recreational marijuana commercial activity in Oregon, including growing and dispensing.

Mark Pettinger, public affairs representative for OLCC, said the agency had limited power in terms of keeping licensed Oregon recreational growers from distributing product on the out-of-state black market. Unlike recreational marijuana enforcement agencies in other legal states like Colorado and Washington, the OLCC has no criminal law enforcement power.

“So any kind of action that we take against a licensee would be an administrative process,” he said. “There are some instances where we have found out, often as a result of an ongoing criminal investigation of a licensee that they are breaking the law and we work as quickly as possible to stop their license.”

So, OLCC could revoke a recreational license if a grower were out of compliance or involved in the black market. But sheriff’s deputies would still respond to tips, serve warrants and issue citations.

Pettinger hopes this move will smooth OLCC and OSP operations to quash illegal and over compliance grows.

But for Medina and his licensed medical business, the real issue is the thriving recreational market in the Klamath area.

“A large percentage of the cannabis being grown here is going out of state — it has been for generations and that’s just continuing,” he said. “The problem that I see is because we don’t have any place to purchase recreational marijuana in this town, a lot of people are taking advantage of the situation. ”

Marijuana is sold generously on the Klamath Falls and Klamath County black market, he said, and since it has become so cheap in an oversaturated and “under-enforced” market, many medical marijuana patients and growers no longer see proper legal registration as necessary.

“That has created an entire new market that didn’t exist necessarily before,” Medina said. “So the lack of people having a legal recreational option here is like: when the cat’s away, the mice will play.”