Appeasement is often touted as a way to avoid conflict. Give a screaming child a piece of candy and he will be quiet for a few minutes. The problem with appeasement is that it does not supply long-lasting satisfaction; it merely forestalls desire temporarily while simultaneously telegraphing your weakness when faced with the prospect of confrontation.  In other words, the child will just start screaming again in order to get more candy.

It’s similar when dealing with those on the political left. They love to throw around words like “compromise,” “reasonable,” and “responsible” when selling their ideas, but behind the façade of negotiation is an unabashed desire for total and complete control of every aspect of human existence. Every now and again, the façade slips away and the truth is revealed. This happened recently with the unveiling of Alexandria Ocasio-Cortez’s “Green New Deal” and its accompanying literature.

Though her team spent the next week tripping over each other as they backpedaled on their messaging, the truth had slipped through and people caught a glimpse of what was behind the curtain. With concepts such as “we aren’t sure that we’ll be able to fully get rid of farting cows and airplanes that fast…”; goals like “replace every combustion-engine vehicle”; and ideas like “guaranteeing … economic security for all who are unable or unwilling to work,” there was little doubt remaining as to the radical intentions of the plan’s socialist drafters. Don’t leave the locals out, though. This particular strain of insanity exists in Idaho too: Boise Wants 100% Renewable Energy Sources by 2040

Every day brings new proof of how radical the left has become (or perhaps always was.) Headlines such as “Manufacturer of AR-15 Can Be Sued Over Sandy Hook Massacre, Court Rules” and “Why Animal Rights Is the Next Frontier for the Left” give us a glimpse of where this is all headed. Nothing is safe from the left’s unrelenting war against everything we hold dear. Not our guns, not our food, not our healthcare (if you like your doctor, too damn bad!) not even our kids walking to the park or playing outside.

The left wants to control everything you do, everything you own, and—ultimately—everything you think. Do you harbor a belief or opinion contrary to the accepted norms? Do you question the orthodoxy of “settled science”? If you do, prepare to be silenced. “Facebook announces plans to block anti-vaccination content” and “Amazon removes books promoting … vaccine misinformation” scream the headlines, praising this modern version of book burning as targeting “medical myths” and “hoaxes.” Don’t question your presumed thought leaders, little people. Thinking is now above your pay grade. 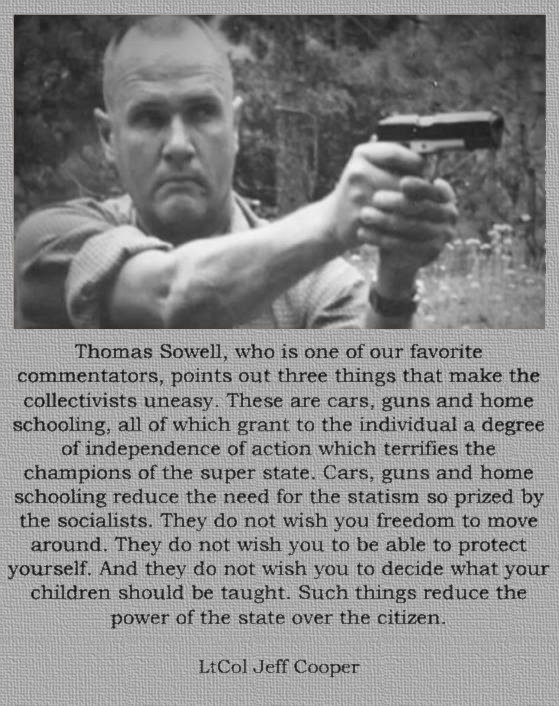 The left hates anyone and anything that deviates from what it believes and endorses. It hates gun owners, homeschoolers, meat eaters, “anti-vaxxers,” “climate change deniers” free-range parenting advocates, and people who don’t drive battery powered cars. In all likelihood, the left hates you because you are visiting this website.

Do you want to live in a world where you can’t legally own a gun, eat a hamburger, or run your car without an extension cord? Are you willing to accept all of the healthcare and education decisions for you and your family being handed down from central planners? Are you tired of thinking for yourself?

If you answered NO to any of the above questions, I would suggest that it is time to STOP appeasing the left. No more compromises. No more concessions. No more appeasement. The left started this war and now it’s time for us to finish it. Does this mean we need to take up arms and begin executing communists? No. The primary battlefield is your own life. That is where you can have the greatest impact. Take a stand for what you believe in and don’t apologize to those on the left who try to shame you. Do what you know is right and do so loudly and proudly. Live your life with conviction.

I carry a gun. I drive a truck that runs on gasoline. I eat steak and hamburger. I don’t believe anything the government tells me. I don’t do everything a doctor recommends. When I have kids, I’m going to homeschool them. And you know what? I don’t give a damn what anyone thinks about my decisions. That’s how I do battle against the left. How about you? Make your declarations. Draw your lines in the sand. Own who you are and what you believe. Be aware, be wary, and keep apprised of the important issues that could change your life.

I’m done with appeasement, and I hope you are too. Now let’s get out there and win this war once and for all!