A Frightening Week as “Hurricane Mueller” and Impeachment Close in on Trump! 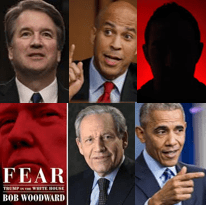 It was a wild week! Not just because of the confirmation hearings for Judge Brett Kavanaugh and the dog and pony show we were forced to witness from both political parties, much less the leftist vigilante mostly radical feminist shrieking “disrupters” lodged in the Senate gallery, but also because of the lying and deceit of Democrat Senator and presidential wannabe Cory Booker.

Top this all off with the alleged administration official who treasonously penned a “tell all” op-ed for the New York Times and the phony anti-Trump book of washed-up Washington Post investigative reporter Bob Woodward. Woodward (as is his looney partner Carl Bernstein) is trying to resurrect his days of glory as the one who brought down former President Richard Nixon. Now he has President Trump to try to add to his trophies on the mantle in his fashionable Georgetown townhome on Q Street.

What a crowd! It’s like Shakespeare and the witches of MacBeth stirring the caldron to overthrow the American president. And looming on the horizon is the wicked establishment elite warlock Special Counsel Robert Mueller, poised for yet another torture session with former Trump presidential campaign manager Paul Manafort, who is set to be tried in Round 2 next week in the courtroom of the pliant, dishonest and corrupt Obama appointed Judge Amy Berman Jackson. This is not to mention that Mueller and his “team” of unethical leftist prosecutors, led by the team’s second in command “fuhrer” Andrew Weissmann, continue to goose step ahead at full steam with his so-called Russian collusion and obstruction of justice inquisition by this week calling before the grand jury more Roger Stone allies, such as the renowned author Jerry Corsi.

And, then there is the continued ineptness if not incompetence of President Trump’s own lawyers, Rudy Giuliani and Jay Sekulow, two counselors who specialize in appearances on Fox News, but are good for little else. As the president continues to get dragged to the guillotine in a Democrat bought and paid for cart, with impeachment looming on the horizon if the donkey wins control of the House of Representatives in the 2018 midterm elections, these neutered “legal beagles,” if not spayed pussycats, continue to falsely spew that Mueller’s investigation is coming to a close.

Giuliani and Sekulow even falsely “leaked” this week that Mueller was now prepared to accept written answers to written questions, rather than subpoenaing The Donald before his cooked grand juries! This proved not to be true just a few days later. The level of inaction and misleading grandstanding by the president’s legal court jesters has reached epic proportions, reminding me of Woody Allen’s film “Everything You Wanted to Know about Sex but Were Afraid to Ask.” In one of the comedian’s vignettes, the king, whose queen his court jester tries to bed, the monarch calls upon his palace guard to “bring me the fool,” meaning the court jester, played by Allen. It’s time that President Trump lock up in the tower of their babble his duo of court jesters and get real lawyers to defend him by going on offense, don’t you think!

Going on the offense is not only crucial because of the witch hunt of Robert Mueller, but also because leftist dominated social media, such as Google/YouTube, Facebook, Twitter, Apple, and their comrades are illegally colluding, either expressly or as a result of acting consciously in parallel fashion, to take down President Trump and his administration, with the intent and goal to install “favorable’ leftist governments, run by leftist politicians who will bestow more favors on these insanely rich companies, in not just Washington, D.C., but also throughout the 50 states. Just last week Freedom Watch and I filed an antitrust class action to remedy their discrimination those supportive of the president and conservative/libertarian causes.

Couple this with the leftist onslaught if not attempted coup being continuously waged by CNN, MSNBC, NBC, the New York Times, the Los Angeles Times and of course the most compromised of all The Washington Post, owned by ultra-leftist trillionaire Amazon founder Jeff Bezos – not coincidentally Bob Woodward’s employer – and we have an attempted overthrow of the Trump presidency in real time!

Not to be left out of the leftist onslaught to seize control of our republic, former President Barack Hussein Obama reared his ugly reverse racist head last Friday, giving a call to arms for his fellow socialists and Trump haters. True to his past form, he not only accused The Donald and his followers of being racist, but ironically again bore his anti-white, anti-Judeo-Christian, pro-illegal immigrant, pro-radical Muslim (of course Obama is half Muslim and fully Muslim under Shariah law), pro-radical feminist and pro- whatever leftist cause, announcing, finally out in the open (he had been in hiding in his 8 million dollar cave in DC) his own new jihad to push the country to Marxist/Leninist/Trotskyite rule. This dovetailed with the cheap and dishonest misconduct of Senator Cory Booker during the Kavanaugh confirmation hearing, where he dared the Senate to remove him from office with the false claim that he was about to illegally release documents proving that the Supreme Court justice to be was a racist because he supported racial profiling during the George W. Bush administration, when he was a staff secretary for W. Of course, should the full Senate ever seek to expel Booker, he will cry that this is because he is a black man! More racism by white supremacists!

Calling it a “Spartacus moment,” Booker was proved to be the Obama-like liar that he is, when it was disclosed that the Trump White House had already cleared the release of the document, which was an internal email. This document lo and behold showed that in reality, Kavanaugh was against racial profiling and not a racist.

Make no mistake about it, this week demonstrated anew, in even more stark terms than ever before, that the left has declared war not just on President Trump, but also the rest of us alleged deplorables and racists who support the vision of Founding Fathers. We must now, more than ever pledge our sacred honor and risk our lives to wage a counterrevolution against the followers of King Barack Hussein Obama and his court!