Who said, “voting does not matter….counting votes does”?—Joseph Stalin. It seems that the emphasis on so many contested elections has been on the process of counting votes. Certainly, in this day and age, the ability for ballots to be manipulated is of great concern to those who want to protect the election process. Technology can be used to secure the voting process, but it can also be abused and manipulated as many credible organizations are alleging today.

A group of MIT researchers including one Fulbright Scholar Dr. Shiva Ayyadurai (the inventor of E-mail) have analyzed voting data by precinct in Michigan in the November 3rd Presidential election. If access were more available in other States this same methodology could be applied to individual precinct examination in other selected precincts. Dr. Ayyadurai points out that he was alerted to this problem on election night when it looked like Mr. Trump was going to win all the contested States that were required for him to win. At about 3 hours into the count—counting stopped for about three hours. Below is an analysis of what happened:

In Oakland, Macomb, and Kent counties in Michigan, the pattern of support for Trump showed a downward regression line as county precincts grew more Republican.

But in Wayne County, which contains much of the Detroit metropolitan region, no such pattern existed—signaling that, for whatever reason, this alarming feature of the voting software was not toggled. The Trump margin was higher than anticipated, but votes for Trump were not only being not counted—they were being transferred to Biden! 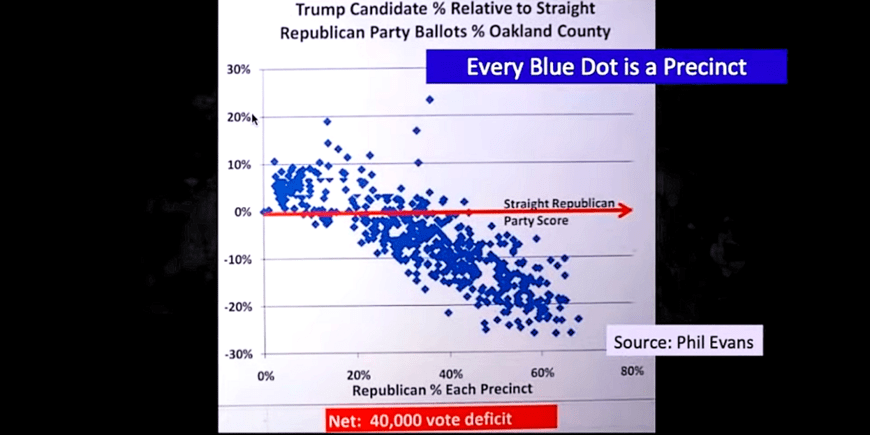 It may be because of the extra scrutiny placed on Detroit, with Trump calling on his supporters to watch the elections in blue-run cities very carefully; or it may be that Democrats wanted to avoid the risk of disenfranchising their own voters in the heavily minority area, which would have escalated the voting abuse into a civil-rights case.

Remarkably, without the algorithm in place, the diagram showed that Trump garnered considerably more support in Detroit than the generic Republican might have. He actually got far more votes in Detroit than he did last election. 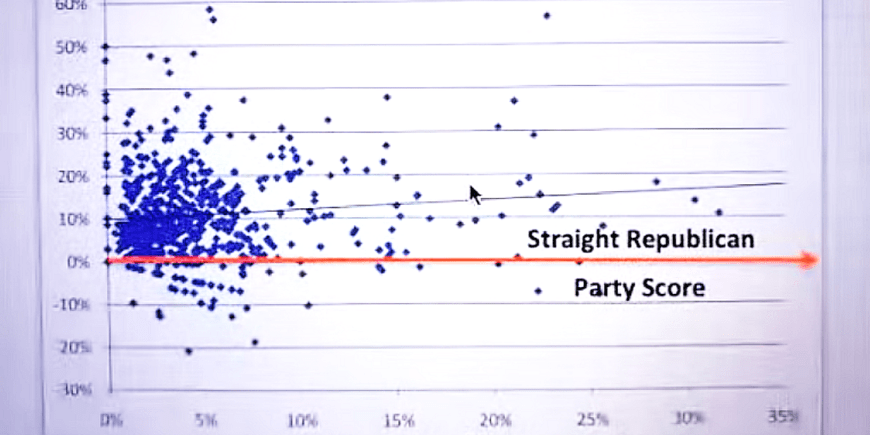 The Dominion voting system is designed by a Canadian company financed by Venezuelan bankers to rig an election in their own country. It used a software algorithm that automatically transferred votes from Mr. Trump to Mr. Biden. Two years ago even Senators Amy Kobach and Elizabeth Warren warned of the potential for fraud and manipulation when these algorithms were used to override the votes that were placed into the machines. The irony of all this is that the algorithm didn’t automatically calculate or take into account the level of President Trumps positive margin and the adjustments had to be made on the fly as the data was transferred overseas and then to major news agencies in this country. Who was complicit in this process? What about the FBI and the CIA and the NSA? Were they active advocates tilting the scales of democracy just like they were in the 2016 election?

There is a complete contempt for process and the chain of custody when information is transferred prior to a count being posted. Prior to a machine being used for casting and counting votes it needs to be secured. When voting machines are placed on line it provides an opportunity for interference from an outside party—a hacker with a client with deep pockets. Without dissecting the fraud itself the evidence for the process that led up to the fraud is incontrovertible.

It won’t be technology that saves the day, nor will it be the courts, but ultimately process and governance will have to come to the rescue and let me make a suggestion in this regard.

We have major accounting companies—Delhoitte, KPMG, PwC who specialize in securing, archiving, and documenting complicated and complex transactions. Such expertise needs to be leveraged. 1st of all the voter needs to be qualified—which would be analogous to a registration process. Then the ballot requested needs to be delivered to that individual. That individual needs to be confirmed as being the person who fills out the ballot. The ballot needs to be delivered and the chain of custody verified. The actual vote needs to be secured, counted, a record of the vote and the process securing the legitimacy of the vote needs to be archived for future review. 3rd party collection of ballots and the bundling of individual ballots should be illegal. The only person with access to a ballot should be the person filling out the ballot.

With individual on sight voting this process could be easy and made even more secure. The registration and validation process could be facilitated with something like a fingerprint or retinal scan. Offsite voting becomes more problematic but not insurmountable.

One final thought about what has just happened with our election. The process that has led to the cheating in our most recent election was well known and well thought out ahead of time. This process was intentionally deployed and had a purpose. It is without question that cheating has occurred. Cheating is something that doesn’t just happen. It is not a mistake or a “glitch”. Cheating is always a purposeful act. It has to be thought out a head of time. Cheaters don’t make a mistake when they cheat. Those on the left have purposefully cheated. Chuck Schumer, Nancy Pelosi, the DNC are all cheaters and they know they are cheaters. The mainstream media has a vested interest in this process which is why they are fighting so hard against transparency. People who are cheaters should not be treated with dignity and respect, but they should be called out for who they are. They are not nice people.

5 replies on “It’s Not Who Votes That Counts, It’s Who Counts The Votes!”

Biden’s are just PIMPS of the NWO.

Retinal scan to vote? Are you freaking joking? Never in a million years will I, nor my family allow a retinal scan for anything!

Thanks for your kind reply. You didn’t vote this year! The millions of fraudulent illegal votes that were counted voided and nullified your vote and mine. A process for verifying votes and then reconciling counts and archiving ballots requires proof that the person identified on the ballot as being the voter is in fact the one casting the vote. Today with vote “harvesting’ “securitization” of bundles of ballots, and “curing”—-all done by third parties without a chain of custody requirement makes each legal vote count for less than 1 vote.

In person voting with a phot ID would work, but in other cases proof is required. When I voted absentee in the service for over 20 years I would have to have my ballot notarized and validated with address and ss# or photo ID of my active duty card or Geneva Convention Card. This is not done anymore. One time a copy of my orders was required. My home address also had to be validated.

Until we can figure out a way to validate who is casting the vote your vote and mine don’t really count as one full vote.

In testimony before the Pennsylvania Senate it was revealed that 1.8million paper ballots were sent out in PA. and 2.5 million were counted!.. The Presidential election and many down ballot elections were rigged up front. Where are the rest of the Republicans in the US Senate and House and State Governors? WE should all be outraged. Our votes were marginalized and our political leaders are standing back and doing nothing. As long as we vote for them and they get elected they will pat us on the head and forget about us until the next election. Please Idaho Congressional Delegation stand up and fight for our President and your constituents–now—please.
“If not now when?
Of not you who?”

No doubt in fraud, I always look for Idaho representation in questioning situations such as elections. I am very disappointed in our law enforcement ( federal- Bill Barr, Durham , FBI etc) we watched a 8+ hr hearing Monday Nov 30/ 2020. It was a hearing by the Trump legal team, in the state of Arizona & was investigations that should be done be these Federal organizations, it was broadcast by One American News only. We looked for it on CNN, MSNBC,ABC,CBS the had more important things to do.
Today Bill Barr told us he was unaware of any evidence of fraud !! If you are not looking for something, you most likely are not going to find it. We felt 3 yrs ago there was enough evidence with Comey, McCabe, Brenan, Russia Russia, Lying to Congress, etc all Crook-ed. I am not giving up !