Liberals will be shocked to hear this. Yes, I finally agree. You’ve won over Wayne Root with evidence and common sense. It’s time to impeach the president.

However, it’s not President Trump I’m talking about. It’s time to impeach former President Barack Obama. And of course, prosecute him too.

Many are starting to come to this conclusion. Tom Fitton, the legal genius behind Judicial Watch (the number one government watchdog in America), has come to the same conclusion. Fitton said this week that amidst a climate of impeachment fervor, the actual evidence points to Obama’s actions warranting impeachment far more than Trump. Fitton reports that ordering surveillance and sending spies into the Trump presidential campaign are all grounds for post-Presidency impeachment and more importantly, prosecution.

None other than greatly respected former White House Press Secretary Ari Fleischer said this week, “I guarantee the answer is yes” as to whether Obama knew the FBI had planted spies into the Trump campaign. He says no FBI Director would dare infiltrate a presidential campaign without the direct approval and authorization of the sitting president.

Welcome to my world. I’ve screamed about Obama’s illegal actions for years. Starting of course with his attempt to use the IRS to destroy my life. But I’m just one of thousands of victims. I have always understand the lengths Obama would go to, to destroy his political opposition.

Obama didn’t just authorize illegal spying, surveillance and FISA warrants based on fraud, paid for by Hillary and the DNC. He ordered it all.

Somehow this must all be getting through. Despite 93% negative news coverage from the mainstream media, President Trump is sitting pretty at 50% approval at Rasmussen (the most accurate pollster of the 2016 election). More shockingly, Reuters generic Congressional poll has shifted from Democrats winning by 16 points back in February, to Republicans up by 6 points this week. YES, I said Republicans are now leading by 6 points.

Why do you think this is? Because the average American now understands what happened. It isn’t Trump who did anything wrong. He was clearly framed by Obama, Hillary and their minions in the DC Swamp (FBI, DOJ, CIA and NSA).

But far worse is the reason for the framing. First, Obama had a personal hatred and obsession with Trump—for daring to ask questions about Obama’s birth certificate, place of birth and college records. Second, Obama was on the hook for his own crimes: spying, surveillance, criminal weaponization of government agencies like the IRS. And he was also on the hook for allowing Hillary’s crimes, including the Uranium One deal, where the Clinton Foundation received $140 million in donations from Russia.

But that was only one of many corrupt deals while Hillary served as Obama’s Secretary of State. Jay Sekulow of the American Center for Law and Justice reported days ago his organization has uncovered THOUSANDS of docs showing Pay-to-Play between Hillary’s State Dept and the Clinton Foundation. He called Hillary’s State Dept a “favor factory.”

Sekulow found 30,000 emails between Hillary, her top staff and the Clinton Foundation. This is crime on a massive unprecedented scale. The State Dept became a division of a private company (a charity scam), using taxpayer money to dole out government contracts to Hillary’s donors. 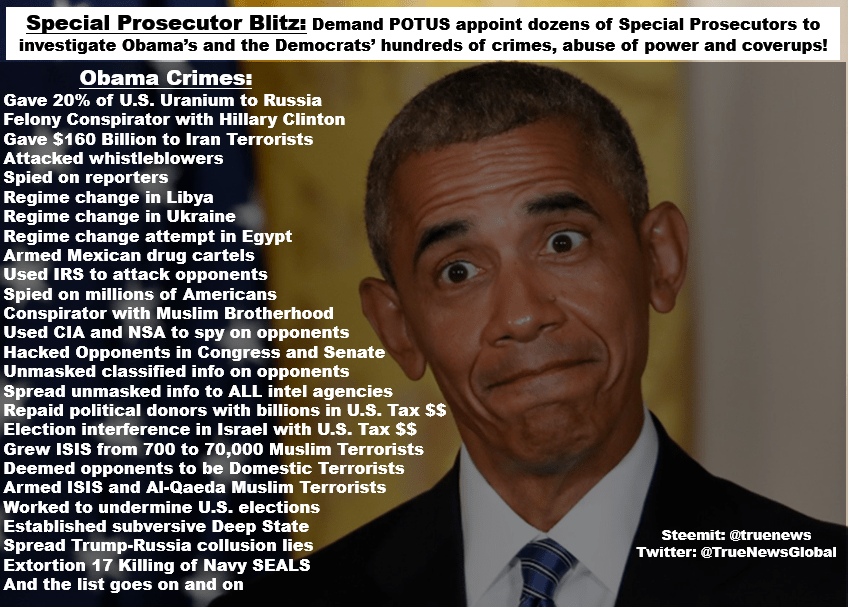 How much money changed hands? Billions? How many crooked deals? Hundreds? How many other members of

Obama’s administration got cut in on the bribes? Could President Obama have had a piece of the action? Obama desperately needed Hillary to win, or he’d face criminal prosecution. Remember what Truman said, “The buck stops here.”

And then there was this news: Wikileaks reports Obama was a veteran of illegal spying. They claim to have proof Obama ordered the CIA to spy on all of France’s presidential candidates.

Who else did Obama spy on? What other world leaders did he try to frame just like Trump? How about American politicians, like his 2012 opponent Mitt Romney? Obama and Hillary tried to fix the 2016 election. Is it possible Obama fixed the 2012 election with spying and surveillance vs. Romney?

Yes, the media is right. It’s time to start talking about impeachment and prosecution of a president…