Using GIS tools, the WWHC created the Crucial Habitat Assessment Tool (CHAT). The WGA launched this tool in 2013, managed it through 2014, then transferred it to the Western Association of Fish & Wildlife Agencies (WAFWA) in 2015, where it was renamed the WAFWA CHAT. Implemented in several states, as of this time, Idaho does not have a CHAT site. Here is the result of their work, the Chat map. This tool was also used to integrate wildlife data into transportation projects for mitigation of wildlife vehicle collisions and conservation.

Since 1922, WAFWA has represented “Western Fish & Wildlife Agencies“, currently in 23 states and Canadian provinces…” Aside from the treasurer, all Officers are from other states besides Idaho and members include other states and countries. 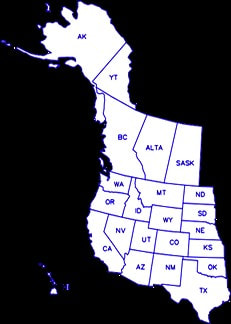 While WAFWA claims to be an “affiliate” of the Association of Fish & Wildlife Agencies (AFWA), and “not a related organization”, IDFG is listed as a AFWA member, there are at least 13 IDFG employees on various AFWA committees, and Virgil Moore, IDFG Director, was named AFWA President this year. Isn’t there some sort of conflict of interest here? Shouldn’t Moore be focused on Idaho and serving Idahoans rather than other interests? AFWA, originally created in 1902, is based in Washington D.C. and “represents state agencies” on Capitol Hill, among other activities. AFWA members include other countries, federal agencies, and UN NGOs (NAS, TNC, SCI). How is this representing IDFG?

How boring, why does any of this matter? It matters because now there are corporations and UN NGOs involved and they are driving the agenda, not Idahoans.

In 2014, the Blue Ribbon Panel on Sustaining America’s Diverse Fish and Wildlife Resources (BRP) was created by Bass Pro shop founder John Morris, and former Wyoming governor Dave Freudenthal. BRP “represents the outdoor recreation retail and manufacturing sector, the energy and automotive industries, private landowners, educational institutions, conservation organizations, sportsmen’s groups and state fish and wildlife agencies.” Their goals include, “recommendations and policy options on the most sustainable and equitable model to fund conservation of the full array of fish and wildlife species.”, and “recommending a new funding mechanism to support state fish and wildlife conservation to ensure the sustainability of all fish and wildlife for current and future generations.”

“The Blue Ribbon Panel includes 26 business and conservation leaders, and “was convened to evaluate and recommend a more sustainable funding approach to avert a fish and wildlife conservation crisis.” Panel members include UN partners (Toyota, Shell), UN NGOs (NWF, AS, NSSF), and other groups funded by UN partners. 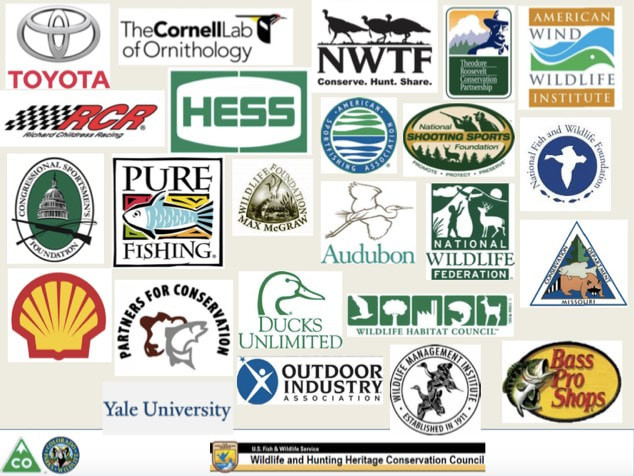 First, they target the difficulty of State Wildlife Action Plans (SWAP) to fully fund their objectives, which is identifying species of greatest conservation of need (SGCN) and conservation efforts to protect them. Therefore, they recommend, “Congress dedicate up to $1.3 billion annually in existing revenue from the development of energy and mineral resources on federal lands and waters to the Wildlife Conservation Restoration Program. These funds would provide states with the resources needed to implement State Wildlife Action Plans which are designed to conserve 12,000
species in greatest conservation need.” They propose oil and mineral extraction companies should turn over part of their proceeds for this endeavor and advertise that opinion to the public as, “This story of state-based fish and wildlife conservation is not understood by most Americans.”, while at the same time stating, “Investing a portion of these proceeds into fish and wildlife conservation is supported by the public…”. Which is it BRP? Do we Idahoans get your propaganda or not? Actually, Idahoans understand both, we understand their agenda and the BRP stating we support their agenda is false. How can a hidden agenda that has never been brought to Idahoans be supported?

Recommendation 2 “…will convene a working group to examine how shifting demographics and changing attitudes about nature are affecting the relevancy of fish and wildlife conservation.”, while also recommending “…state fish and wildlife agencies will need to transform their structures, operations, and cultures to meet the changing expectations of their customers.” Excuse me BRP, Idahoans are not your customers who can be manipulated into buying your line of false advertising and Idahoans are constitutionally in charge of their own state agencies. The BRP solution to offset a loss in revenue from decreased hunting and fishing licenses and other fees is corporate involvement.

Perceiving that Americans are not connected correctly to their land, the BRP also believes “New funding would also provide resources to states to help reconnect people with nature and improve access to the outdoors to improve health and cultivate the next generation of conservationists.” Ok, you are going to spend money to indoctrinate us on your beliefs, like a predator grooms its victim. Maybe we wouldn’t be losing our connection to our land if you and others would stop devising ways to ban our ability to use it. Just how will people be reconnected to land when your goal is placing more land into conservation? Oh, what a tangled web we weave when we practice to deceive.

The BRP focus areas are not just limited to conservation. They also include agriculture, international relations, climate change, and bioenergy, to name a few. Both WAFWA and AWFA support the BRP recommendations. To make everything more complicated, the BRP has changed its name to the “Alliance for America’s Fish and Wildlife” (AAFW). The AAFW does not yet identify its partnerships and members. Needless to say, it is most likely nefarious.

Simply stated, the BRP is a conglomerate of lobbyists to advance corporate interests and conservation NGO objectives, and have succeeded in getting legislation introduced for the 1.3 billion dollars, H.R. 5650, Recovering America’s Wildlife Act of 2016.

However, all of this leads to the true damaging aspect. Corporate involvement has garnered another piece of legislation, H.R. 3400, called the Recreation Not Red-Tape Act. Among other things this bill would create a system of National Recreation Areas (RMA) managed specifically for recreation. A National Recreation Area is the counterpart to a designated wilderness area or national monument, an identified protected area for recreation. The Outdoor Industry Association and NGOs love this as it benefits corporate greed, and NGO agendas to lock up and control land. Idaho representation is removed as the AAFW, with its corporate partners and NGOs, will continue to influence the direction of our federal land use. The WGA is also entertaining the idea to “fund landscape-scale conservation through private investments in habitat stewardship and ecosystem services.” The Wilderness Society spells out just exactly what a recreation management area is, with all the restrictions, using the BLM as an example. Recreation Resource Management is already providing these types of services. Rep. Simpson already stung us with an RMA in the Sawtooth area, thanks, Mike.

The UN places great faith in these public-private-partnerships (PPP) for recreation and tourism as outlined on page 14 in this UN World Tourism Organization booklet, even going so far to claim that “eventually the government must rely on the private sector to deliver services to tourists.” Really? How did Americans ever get by without crony capitalism or a despot organization dictating our experiences in the wild?

As the advances in corporate takeover of our public land continue, another scheme is the “green investment scenario would allow the sector to continue to expand steadily over the coming decades while ensuring significant environmental benefits such as reductions in water consumption, energy use, and CO2 emissions.” UN business partners will start forcing UN ideology on us as we try to use our public lands. In true technocratic fashion, the UN has broken tourism down into four categories, ecotourism, nature, sustainable, and responsible tourism. The UN has been at this awhile, expanding on tourism in the 2002 Johannesburg Plan of Implementation of Sustainable Development.

Chapter 7.20(e) of Agenda 21 promotes sound and culturally sensitive tourism programs, even writing about it in 1997. In Agenda 2030, Sustainable Development Goals (SDG) 8.9 and 12.B, are targeted to “devise and implement policies to promote sustainable tourism that creates jobs and promotes local culture and products”. Given UN business partnerships are driving us towards corporatism, this is the direction our government is taking us, placing the governance of public land into private business hands which will promote “sustainable” recreation while creating jobs and products, all in support of the UN SDGs. We are being robbed of our God-given right to use our land.

Land conservation is also falling into corporate hands. The National Fish & Wildlife Foundation (NFWF), established by Congress in 1984 and based in Washington D.C., is a conglomerate of federal agencies, corporations of which many are UN partners, and foundations. It is a “conservation grant-maker”…”to protect and restore our nation’s fish, wildlife, plants, and habitats.” They have multiple conservation programs throughout the U.S., including the Cabinet-Yaak area in northern Idaho.

The NFWF describes the corporate run future of Idaho land in their business plan, which provides “prospective investors” information and “internal guidance” to achieve conservation goals. Money from investors, which matches public dollars with private contributions, is intended to help fund conservation initiatives for “corridors and connectivity”. Focal areas include the Cabinet Yakk, US 20 in Island Park, and along the border in the High Divide area for protection and conservation, while bridging “multiple jurisdictions”. Themes of that funding include road ecology (wildlife overpasses), habitat protection, and capacity building (getting others to join in their agenda). It isn’t enough that the government possesses the majority of Idaho, they want to take more for protection and control. $12.0 million has already been approved for the High Divide project. 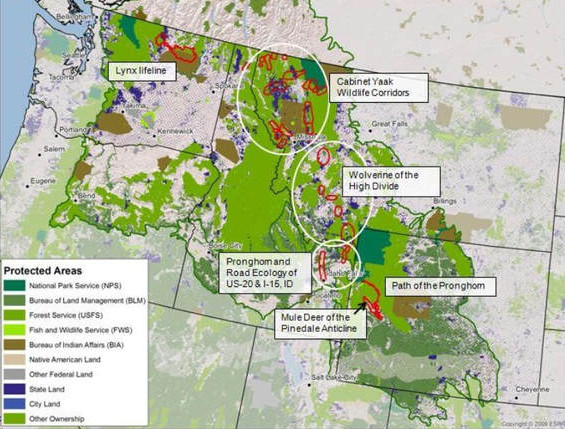 Not to be outdone, The Nature Conservancy (TNC) has joined the corporatism bandwagon. In 2014, sponsored by UN business partner JPMorgan Chase & Co, they created a program called NatureVest, which is intended to accelerate their conservation goals. How can the lowly taxpayer compete against all of this corporate money advancing UN goals?

Starting with the WGA, then winding through a barrage of non-Idaho agencies, corporations, countries, and individuals, we are being led to corporations with money that completely bypasses our Constitutional right to local and state representation. IDFG employees are public servants, hired to represent Idahoans through state law. Our Senators and Representatives are elected to represent our state and us. But, the truth is, representation has been turned over to other states and countries, corporations, and NGOs who are here to serve the UN agenda. Sad to say, but Americans have already lost one foundation of our Constitution, representation by elected officials, going instead to corporate control and interests, and the UN.