The Humanitarian Hoax is a deliberate and deceitful tactic of presenting a destructive policy as altruistic. The humanitarian huckster presents himself as a compassionate advocate when in fact he is the disguised enemy.

Obama, the humanitarian huckster-in-chief, weakened the United States for eight years by persuading America to accept his crippling politically correct sanctuary city policies as altruistic when in fact they were designed to destabilize and destroy civil society. His legacy, the Leftist Democratic Party and its “resistance” movement, is the party of the Humanitarian Hoax attempting to destroy American democracy and replace it with socialism.

The term “sanctuary city” originated in the 1980’s when San Francisco passed a city ordinance forbidding city police or city magistrates from assisting federal immigration officers in enforcing immigration policies that denied asylum to refugees from Guatemala and El Salvador. The mission of the sanctuary city was to protect innocent refugees from deportation – although these immigrants were in the U.S. illegally they had not committed any other crimes.

ACTUALLY THEY ARE SANCTUARY JURISDICTIONS

The shocking murder of 21-year-old Kate Steinle on July 1, 2015, publicized the danger of sanctuary jurisdictions. The shooter, Juan Francisco Lopez-Sanchez, an illegal immigrant from Mexico with seven felony convictions had been deported five times and intentionally sought shelter in San Francisco. Yet officials in “sanctuary city” San Francisco refused to turn him over to federal authorities for deportation and instead released him into society enabling him to kill Kate Steinle.

BY ANOTHER NAME IN IDAHO: ‘WELCOMING CITY’ 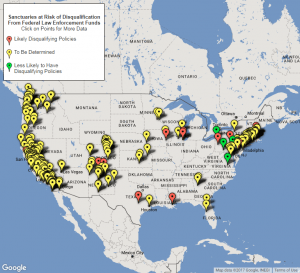 The three young Muslim migrant boys who savagely raped and urinated in the mouth of an innocent five-year-old girl in Twin Falls, Idaho last year were protected as well. No jail, no deportation, in fact these monsters were shielded by the mainstream media and local city officials who tried to cover up the case and pretend that Twin Falls was a model for multiculturalism. Wendy Olson, Obama-appointed U.S. attorney for Idaho stunned the country by threatening to prosecute Idahoans who spoke out about the heinous crime in ways SHE considered “false or inflammatory.” Judge Thomas Borresen issued an equally stunning gag order that denied the right of anyone in the courtroom to speak about the sentencing even AFTER the case ended.

Twin Falls is one of two Muslim refugee relocation centers in Idaho. Rather than identifying themselves as a “sanctuary city” Twin Falls has chosen the equally disingenuous name of “welcoming city” and declared themselves to be a “neighborly community.” REALLY? Protecting rapists and censoring free speech is definitely not neighborly for the victims!

The word sanctuary implies safety from a threat – it does not mean shelter for immigrant criminal felons, rapists, murderers and terrorists who threaten the safety of law-abiding citizens. Why would any law abiding citizen endorse the protection of these criminals whether they are illegal aliens or legal citizens? The answer lies in the active participation by the mainstream media in the humanitarian hoax of sanctuary cities. The media has deliberately romanticized sanctuary cities as humanitarian havens for the oppressed instead of honestly reporting them as despicable safety zones for criminal aliens. The colluding media has duped the trusting American public and exploited their compassion and goodwill.

The protection of illegal aliens from deportation incentivizes illegal entry into the U.S. which has enormous economic consequences as well. Illegal aliens overload our welfare system, cost American taxpayers a whopping $116 BILLION, and rob legal citizens of their jobs.

Obama gave sanctuary cities the freedom to ignore detention orders from ICE through his own Priority Enforcement Program which allowed local agencies to ignore ICE notifications of deportable aliens in their custody. Why? The Leftist Democrat Party under Obama supported sanctuary cities by ignoring the 1996 law 8 U.S.C. § 1373 that repealed sanctuary city policies? Why?

IF YOU WANT TO KNOW THE MOTIVE LOOK AT THE RESULT. INCREASING THE NUMBER OF ILLEGAL ALIENS:

Finally, in July, 2016 Republican Representative John Culberson-TX, Chairman of the Commerce, Justice, and Science Committee on Appropriations took action against the danger and sent a letter to the DOJ demanding federal law enforcement grants be denied to cities not in compliance with the 1996 law 8 U.S.C. § 1373 that repealed sanctuary city policies. Culberson Cuts Off Federal Grant Funding to Sanctuary Cities

Sanctuary jurisdictions doubled down and continue to defy the law.

No-go zones are geographic areas within a country that flagrantly disregard the laws of the country. No-go zones establish a two-tier system of justice within a country because they observe a different set of laws. All across Europe Islamists have established religious no-go zones that recognize Islamic sharia law exclusively. All across America Leftists have created lawless sanctuary jurisdiction that flagrantly defy federal law.

People will stand quietly and peacefully in long lines until one person jumps the line. It is a fascinating social dynamic that as long as members of a group abide by the same rules the consequence is harmony. It is the unfairness of the line-jumper that creates anger and social chaos. Social chaos is the goal of the Leftist/Islamist axis that supports the two-tier system of justice created by secular sanctuary jurisdictions and religious no-go zones.

The goal and the underlying motive of the globalist elite’s campaign to destroy America from within is the imposition of one-world government. Obama is the primary globalist huckster. American democracy is the single greatest existential threat to one-world government and President Donald Trump is America’s leader. The globalist elite are desperate to stop Trump because if Obama’s Leftist/Islamist resistance movement is exposed as their deliberate political tactic to destabilize and destroy America it leaves the globalist elite without their primetime huckster to continue marching America toward anarchy and social chaos.

If the globalists are successful the world will be returned to the dystopian existence of masters and slaves because a willfully blind American public was seduced by the Humanitarian Hoax of sanctuary cities. The Humanitarian Hoax will have succeeded in killing America with “kindness.”