I’m very disappointed with the Governor’s decision to veto the use of bibles as a reference book in our schools. Ever since the 1962/63 decision by the Supreme Court we have seen a spiritually significant event in our country’s history and a slow but steady change in our children’s attitudes in our public schools. We need to recognize that actions do have consequences. Since that decision we have seen Academic Achievement plummet, including SAT scores. There has been an increased rate of out of wedlock births, increased illegal drug use, increased juvenile crime and deterioration of school behavior. Yet we have not seen these same problems become significant in schools that teach with the bible. 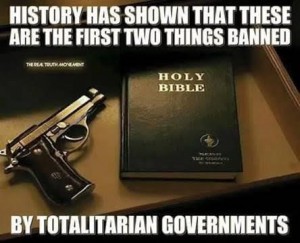 If we go back and compare teacher’s complaints from say 1940 to the Supreme Court ruling in 1962, the complaints were chewing gum, making noise, running in the halls and cutting in line. After the ruling they changed to rape, robbery, assault, arson and burglary. Our children have lost their moral fiber because of this one change by nine judges.

Ten states have passed laws or resolutions to bring the Bible as literature back in their public schools statewide. It’s been shown in nationwide surveys that in schools where the bible is used as a literary curriculum students of faith and those with no faith respond positively to learning about the bible. There are currently 440 school districts in 43 states currently teaching this type of course.

The Governor uses the excuse that he doesn’t want to incur another law suit. Are you kidding me? The state wastes more money using outside companies to defend the state than you can shake a stick at. All you have to do is go back and look at some of the scandals like the CCA and the IEN which is still costing our taxpayers money for legal defense and settlements. How about the $61.5 million that the state spent on “School Net” an evaluation system that our teachers never used. Otter is not the conservative Governor everyone thinks he is, and to back off on signing this bill is just one more reason he should never have been elected for a third term. He brought Common Core into our schools with his buddy Tom Luna which has done more harm than good to our educational system, but he refuses to bring the Bible back into our schools as a literary tool and curriculum. Common Core is not a substitute for the teaching of moral and ethical values which can be derived from the Bible.

Our country was founded on Christianity and its principals, and many of our forefathers were pastors and men of God, who were called the black robes. They understood that a foundation built on the teachings of the bible would sustain our country’s moral and ethical values. The government is taking God out of our lives every chance they get. Why is it that our Politically Correct politicians are so willing to give up our heritage for the sake of not appearing to be confrontational? We don’t need politicians who give up. This was a bad decision by Governor Otter as the people of Idaho wanted this bill passed. This was shown by the vote in the house and senate, why doesn’t the Governor listen to the people. Butch Otter no longer represents the people of Idaho and should abdicate his throne.

Governor Little Should Have “Let the People Go”