— Published with Permission of WesternWire.net —

But this was not a one-sided lovefest–the conference was not without its detractors. One environmental organization staged a week-long string of demonstrations to coincide with the summit. However, their ire wasn’t directed toward President Donald Trump—whose policies were derided during the conference. Instead, the protests were staged against Brown, who, at the start of the conference, signed SB 100 into law putting California on track to being carbon-free by 2045.

A coalition of indigenous groups under the umbrella of the Climate Justice Alliance scheduled a “Solidarity to Solutions (Sol2Sol)” week of action which included “events, direct actions and forums to demand that Brown and climate profiteers put communities, not corporations, first and call for a divestment from extractive energy industries and investment in local community solutions to fight climate change.”

Brown’s climate bone fides have been documented during his tenure as governor. In addition to signing SB 100, Brown promoted and extended California’s Cap and Trade policy and signed legislation that boosted efficiency standards for appliances. He also recently signed a bill that prohibits new construction of pipelines and other infrastructure within state waters if new federal offshore leases are granted, which effectively stymies attempts from the Trump Administration to promote offshore oil and gas development off the California coast.

However, Brown has stopped short of ordering a full moratorium on oil and gas development or a ban on fracking in California, which has put him at odds with some environmentalists.

On Thursday, hundreds of demonstrators gathered outside the main GCAS venue, shutting down streets and calling for leaders inside to do more to address climate change.

On Monday, with the backdrop of a banner that read, “Carbon Pricing is Colonialism” a group of roughly 200 protesters gathered outside the entrance to Gov. Brown’s Climate and Forest Task Force annual meeting. 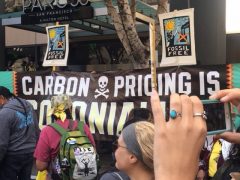 “We reject these market-based climate solutions and projects such as the reducing emission and deforestation program. Because they are false solutions,” leaders declared over a loudspeaker.

The annual meeting being held inside discussed ways that the government, indigenous peoples and private sector can collaborate to reduce deforestation and promote sustainability.

The protesters “risked arrest” in order to deliver an open letter addressed to Brown and the other representatives in the room—which included “indigenous peoples from 30 worldwide locations and dozens of governors.”

Protesters called the priorities of the indigenous representatives attending the meeting into question and expressed their own discontent for not being included in the discussions.

Despite chants of “shut it down,” in reference to the meeting, group leaders were permitted to enter the building and read the open letter to task force representatives. The group rejected calls for “market-based” solutions to climate change, and instead implored attendees to prevent any further development of fossil fuels.

“You cannot commodify the Sacred — we reject these market-based climate change solutions and projects such as the Reducing Emissions from Deforestation and Forest Degradation program (REDD+), because they are false solutions that further destroy our rights, our ability to live in our forests, and our sovereignty and self-determination,” the open letter states. “False solutions to climate change and climate disruption destroy both our material and spiritual relationship to the Earth. The GCF does not represent us and has no authority over our peoples and territories.”

REDD+ is a program conceived under the United Nations Framework Convention on Climate Change and refers to “reducing emissions from deforestation and forest degradation and the role of conservation, sustainable management of forests and enhancement of forest carbon stocks in developing countries.” The framework was adopted in order to reduce emissions from deforestation. Part of the incentivization for hitting specific emissions targets and milestones was the inclusion of a financial mechanism in the form of carbon credits and trading.

But the coalition of indigenous peoples say that such a provision does not abate pollution and simply provides carbon offsets so “polluters can pollute more.”

The implementation of a carbon pricing scheme was featured heavily in several of the GCAS mainstage events. The idea is championed by the Environmental Defense Fund, who, alongside representatives from the governments of California, Canada, and the European Commission hosted a daylong event on its merits.

At one point, protesters staged a conversation between “Mother Earth” and Jerry Brown in a short skit.

“Selling our air is not ok, it is not ok to greenwash, it is not ok to frack or to permit offshore and onshore drilling in communities here in California where you are supposed to be representing them in a very strong way,” the Mother Earth puppet tells Brown. “This is your chance, Jerry Brown, to reverse your acts, to be the real climate leader that you have claimed to be this whole time.”

The skit concluded with Brown kneeling and asking for forgiveness.

The divide between environmental organizations was also on display, with Sol2Sol presenters bringing to attention the financial disparities between groups that were represented inside the Task Force and Climate Summit, and those relegated to the sidelines.

“We are here with the support of small Indigenous and non-Indigenous supportive NGOs. We are aware that other Indigenous organizations are also here, funded by millionaire NGOs, either supporting forest carbon markets or leaving the door open for them,” the open letter read. “Consultations, if at all, in many cases are simply meetings where state agencies, rich NGOs, and others seek only economic benefits, drowns out our voices, and undercuts our right to self-determination. As acceptance of these false solutions is sought, false promises of the titling and protection of our forests and meager economic benefits lead some to accept REDD+.”

A new report released by the Competitive Enterprise Institute calculated the estimated cost of the three-day GCAS at around $10 million. Foundations, governments and businesses all contributed to covering the costs which included “‘Communications, including traditional and digital media, marketing, and branding, Partnership engagement and coalition-building, Fundraising and supporter outreach…’ and a handful of senior, full-time, and off-the-books staff members to Governor Brown.”