— Published with Permission of LibertyNation.com —

“The fourth rule is: Make the enemy live up to their own book of rules. You can kill them with this, for they can no more obey their own rules than the Christian church can live up to Christianity.”

The left might live to regret their decision to use outrage warfare against prominent conservatives. In the past year, we have seen several instances of leftists attacking Trump supporters over offensive comments and using their influence to get these individuals fired. They have also tried threatening advertisers on conservative talk shows with boycotts.

Leftists have successfully leveraged outrage culture against their political opponents. But last week, they saw one of their own fall victim to the same tactics they have employed against conservatives. It appears that right-wingers have finally become fed up with the left’s behavior and are now willing to use their strategies against them.

James Gunn, a famous filmmaker, known for his work on the Guardians of The Galaxy franchise, was fired from his job at Disney after a significant number of offensive tweets resurfaced. On Twitter, the director had made numerous jokes about pedophilia and child rape. While he issued an apology in 2012, people became incensed when conservative journalist Mike Cernovich began tweeting about them. Other media outlets picked up on the story as well.

Here are some of his tweets:

“RT@peteralton I like it when little boys touch me in my silly place. Shhh!”

“Eagle Snatches Kid” is what I call it when I get lucky.”

“Watching Trapped in the Closet, R Kelly’s second best video after the one where he urinates on a child.”

These are some of the tamer tweets from Gunn — there are many posts that are far more egregious. Naturally, people reacted harshly on social media and Disney decided to cut ties with the director.

When actress and comedian Roseanne Barr, who is an avid Trump supporter, posted a racist tweet comparing Obama advisor Valerie Jarrett to characters in the movie “Planet of the Apes,” the left jumped on the opportunity to condemn her for her supposed bigotry — even though Barr has not had a history of making racist comments. Many celebrities, including James Gunn, slammed her on social media for her remarks. Despite the fact that she apologized and stated that she did not know Jarrett is black, ABC canceled her show.

The left has always practiced selective outrage when it comes to famous individuals making offensive comments — or even expressing views they don’t like. They initiated a boycott against Fox News Host Laura Ingraham for criticizing anti-gun activist David Hogg. Media Matters has constantly tried to force Fox Host Sean Hannity off the air by threatening boycotts against his advertisers. They had even targeted Josh Hader, a baseball player who made racially-charged and homophobic tweets when he was in high school. Oddly enough, they do not exhibit the same level of outrage when one of their own engages in the same behavior.

Keith Olbermann, a sports broadcaster for ESPN, is known for posting profanity-laced tweets about President Trump and his supporters, but that didn’t stop ABC from rehiring him earlier this year. Talk show host Bill Maher used the “n” word on his show earlier this year but still kept his job. MSNBC host Joy Reid was slammed by both conservatives and leftists when her homophobic blog posts came to light — but she was not fired.

Interestingly enough, the left did not support Gunn’s firing. Indeed, they came to his defense. Thousands of people have signed a petition calling on Disney to rehire him. Of course, we can all imagine how they would have responded if James Gunn was an outspoken conservative, right?

Outrage culture has become a serious issue in American society, and it is the left who are propagating it so they can use manufactured anger against their political opponents. However, conservatives are now striking back; unfortunately, this might be the only way to put a stop to this social trend.

GOING ALINSKY ON THE LEFT 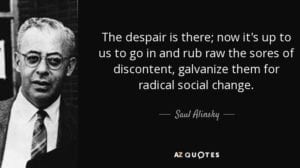 It isn’t a pleasant thought, but the only hope of stemming the rise of outrage culture might be to fight fire with fire. We must practice Saul Alinsky’s fourth Rule for Radicals by forcing the left to live up to their own standards. They have already set the rule: If someone makes comments they don’t like, even if they made the remarks years ago, they must do whatever they can to make sure that person loses their job.

In the past, the left did not hesitate to use unfair attacks against conservatives because they knew they wouldn’t suffer any consequences. Simply put, they knew their targets would not strike back. However, in this case, the more that conservatives show that they are willing to aggressively call out leftists who make legitimately offensive comments, the more likely it will be that the left will think twice before continuing to engage in this behavior.

This principle is similar to that of “mutually assured destruction.” The reason Russia will not launch a nuclear attack on the United States is that they understand that America would respond with a nuclear attack of our own. The result would be the complete destruction of both countries. This notion also applies to outrage warfare.

When the left unfairly attacks a prominent conservative for their remarks, a response must be made. In this day and age, it isn’t difficult to find a tweet or Facebook post that would arouse anger — and if the left realizes that they might be susceptible to the same treatment that they have imposed on others, they might not be so quick to call for boycotts and firings.

Of course, this strategy isn’t foolproof; there is no guarantee that this will work. But allowing more conservatives to become casualties of outrage warfare isn’t really working either, is it? While it would not be wise to use all of the left’s attacks against them — violence, shutting down free speech, etc. — in some instances, it makes sense. If we want to prevent outrage culture from becoming yet another way for the left to damage conservatives, we have to show them that we are not afraid to hold them to their own standards.

Liberty Nation is part of a community of like-minded thinkers. For reliable news and commentary, our go-to sources are WhatFinger.com and CNSNews.com