On November 8 voters living in the Western Ada Recreation District will be asked to approve a $20 million bond to build two swimming pools. One pool will be located near Amity and Eagle in south Meridian. The other is planned for a location near Black Cat and Chinden in northwest Meridian. Ward includes an area, encompassed on the north by the Boise River and south by Lake Hazel Road. The east and west boundaries are Cloverdale and McDermott. 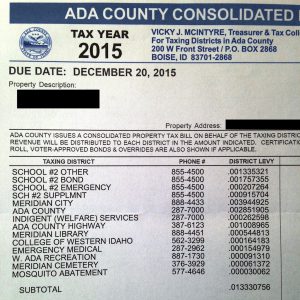 Honestly, I’ve not given much thought to WARD. I have seen an entry on my property tax form showing WARD listed between emergency medical and the Meridian cemetery. It wasn’t until I received two very expensive looking circulars in the mail that I decided to look into WARD. I found out WARD is a special taxing district that oversees the Meridian pool and Fuller park. The other parks and rec facilities in Meridian come under the City of Meridian which is listed beneath School district # 2 on my property tax form.

The very expensive looking circulars are the effort of Friends for Meridian’s Future. The treasurer for the group is Aaron Elton. At this time the group has raised about $100,000. It appears to be based at the same location as ipCREF a company that advises commercial real estate investors. According to an article in the Meridian Press donations for a bond measure may be given anonymously which explains why I couldn’t find a list of donors when I went to the Idaho Secretary of State’s site on campaign disclosures.

Not knowing the donors wasn’t all I didn’t know. As a voter I don’t like being in the dark about any candidate or measure. The dark money was just the beginning of my venture into this deep water proposition to the tax payers. 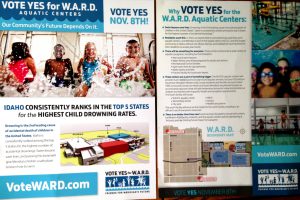 The old saying “The devil is in the details,” comes to mind – except there are few details on the WARD bond measure. The beautiful circulars don’t give much information but DO play to the emotions. I look at those beautiful expensive pro-pool circulars distributed by Friends for Meridian’s Future and the message tugs at my heartstrings until the Fact Checker part of me kicks in. The drowning message simply does not make sense. While it’s true that Idaho has a higher than average number of drownings, one cannot relate this to lack of pools. It’s more related to presence of irrigation canals. 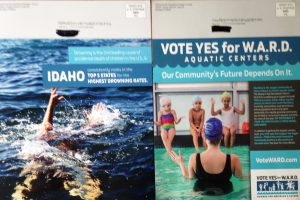 Nowhere in the pro-pool circulars is there mention of the $20 million or how this affects one’s taxes. For that I had to go to Ada County Elections and enter my address to find the ballot – which of course did not include the tax rate. But that’s not the only thing missing from this proposition. Who will run these pools if voters approve the initiative? What is the cost and who will pay? Which property owners will benefit? After searching, I’m still in the dark and I’m envisioning my home being enveloped as the tax waters rise around my property.

Contrary to the opinion of my husband and kids, I’m not a crabby old lady in running shoes who reflexively shouts “no ” and “no” to any proposal raising taxes. I’m someone who believes in supporting kids and families. But recent decisions have left me wondering whether we support large scale developers at the expense of those who live and work in Meridian. Do we subsidize growth while leaving the tax payers on the hook for the associated costs that come with that growth?

This $20 million dollar bond funded by dark money – a plan with few details, promoted on emotion over facts leaves me wondering.