Y2Y – The Government Scheme to Move You Out 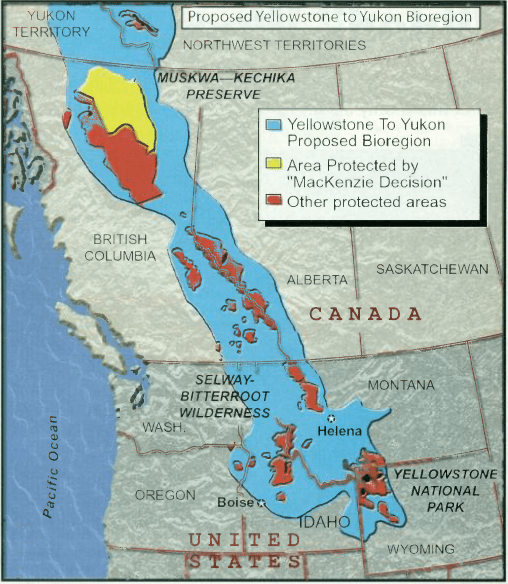 “… the collective needs of non-human species must take precedence over the needs and desires of humans.”

Does… The Wildlands Project advocate the end of industrial civilization? Most assuredly. Everything civilized must go…

It is by creating a matrix of “cores,” “buffers,” and “connecting corridors” that Wildlands activists seek to re-primitivize the North American landscape – and the “web of protected wildlife cores and connecting wildlife corridors” envisioned by Y2Y would be a quantum leap in that direction

‘Re-Wilding of the West’ was published in 1999 by The New American magazine and is now considered a classic report since it is still very relevant and timeless. Particularly, it is difficult to believe the scope of audacity in the conquest for land control and sheer power by our government in lockstep with their comrades at the corrupt United Nations revealed in this special report This report is not available as a link so I am making it available here has a PDF.

The grand scheme to totally un-populate our Western lands called ‘Re-Wilding of the West’ will probably stun you.

Also see the two most recent articles from William F. Jasper, senior editor of The New American, ‘The Federal Bootprint’ which serves as an update to the status of the ‘Re-Wilding’ article and another, ‘Victims of the Federal Bootprint.’

Y2Y originally stood for ‘Yellowstone to the Yukon’ an area that the crazies in our government and the UN, believe it or not, intend, through concerted efforts, to turn back these western populated lands to nature. And now they have even expanded this original geography grab to change the meaning of Y2Y coverage to mean that they want it to cover the Yukon to the Yucatan. Hard to believe? Read on.

THE WILDLANDS PROJECT HAS LEGS – YUKON TO YUCATAN

In 2003 the proponents of the Wildlands Project, the plan to re-wild 50 percent of the United States from the Yukon in Alaska to the Yucatan Peninsula in Mexico, ramped up their propaganda promoting to secure large areas of the western United States as a migration corridor for all wild animals.

Y2Y -THE WILDLANDS PROJECT – IN THEIR OWN WORDS:

The Wildlands Project is a radical plan whose website states; “It is not enough to preserve the roadless, undeveloped country remaining. We must re-create wilderness in large regions: move out the cars and civilized people, dismantle the roads and dams, reclaim the plowed land and clear-cuts, re-introduce extirpated species.”

Mead Gruver, an Associated Press writer quoted Jen Clanahan, the group’s regional director on 9-25-03, ”A park here, an open space there, isn’t working because we’re still losing species at much higher than the natural extinction rate.”

“Clanahan explained that while few species migrate all the way from Mexico to northern Canada, contiguous protected areas make replenishment possible when isolated populations are wiped out due to wildfire or disease.

“And she said large animals such as wolves and bears require lots of space – as do natural processes like wildfires and floods.

”’It’s a big plan and it’s going to take a while to implement. We call it a 100-year vision,’ she said. ‘The first step is you need to get out there and talk to everyone. And that’s what we’re doing now is talking to agencies, the landowners, other conservation groups, local community leaders.’

Gruver continued, “She said she hopes the blueprint can influence long-range planning by the U.S. Forest Service and Bureau of Land Management.

From The New American report “Re-Wilding of the West:” 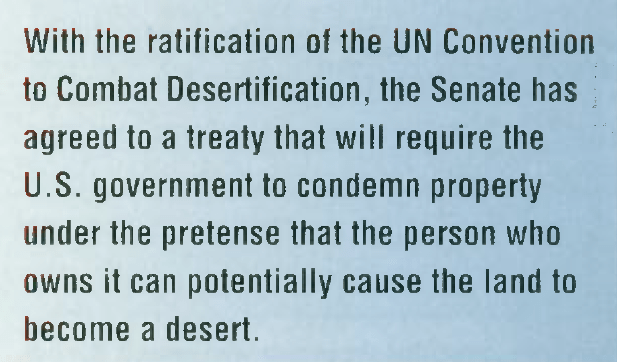 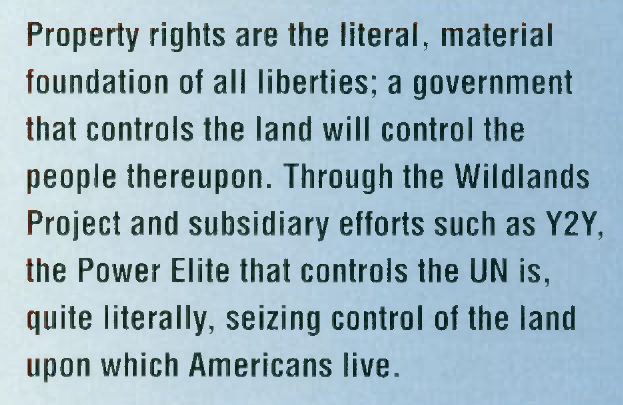 The John Birch Society is focused on establishing informed electorates in all congressional districts. JBS never supports political candidates or parties, rather it informs the electorate to discern and support those candidates who are likely to adhere to the Constitution.

Globalists need the American people to be ignorant; American patriots need them to be informed.

“He who passively accepts evil is as much involved in it as he who helps to perpetrate it. He who accepts evil without protesting against it is really cooperating with it.” – Martin Luther King, Jr.