Julius and Ethel Rosenberg were executed on June 19, 1953 after being convicted of conspiring to pass U.S. atomic secrets to the Soviets, at Sing Sing Prison in Ossining, New York. They refused to admit any wrongdoing and proclaimed their innocence right up to the time of their deaths, by the electric chair.

The Rosenbergs were the first U.S. citizens to be convicted and executed for espionage during peacetime.

The Rosenbergs had persuaded Ethel’s brother, David Greenglass—an employee at the Los Alamos atomic bomb project—to provide them and a third person, Harry Gold, with top-secret data on nuclear weapons. The chief evidence against the Rosenbergs came from Greenglass and his wife, Ruth.

When President Dwight D. Eisenhower refused to invoke executive clemency for the Rosenbergs he stated, “I can only say that, by immeasurably increasing the chances of atomic war, the Rosenbergs may have condemned to death tens of millions of innocent people all over the world. The execution of two human beings is a grave matter. But even graver is the thought of the millions of dead whose deaths may be directly attributable to what these spies have done.”

THE GREATER BREADTH OF THE CLINTONS’ TREASON

Maybe it depends on what is, is, right? Not hardly. Treason is treason! Slick Willy and his phony bud Hillary are full of it.

The mammoth amount and variety of technological information sold by Bill Clinton to the Chinese made the info the Rosenbergs passed on about a single bomb technology seem pale in comparison. Clinton also gave the Chinese supercomputers used in the technology of nuclear and missile warfare, which in effect, gave the Chinese a 20-year head start. By selling advanced U.S. missile technology to our enemy, the People’s Republic of China, President Bill Clinton basically wiped out any strategic advantage the U.S. had up until that time.

As Edward Timperlake and William C. Triplett II reported in their 1998 book ‘Year of the Rat,’ a most thorough expose’ on the Clinton/Gore treason committed, “Who would have guessed that, In return for money, Bill Clinton and Al Gore would literally sit down to supper with a procession of agents for the Communist Chinese army, Chinese intelligence, the Macau criminal syndicate, and Cambodia’s biggest drug trafficker?”

Chinese intelligence services and their military gave the Clinton administration millions of dollars in illegal campaign contributions laundered through heretofore unheard of’s that were to become infamous in the revealing of the Clinton payoffs. Names like the Riady Clan (Mochtar Riady, his wife, and three sons), John Huang, Charlie Trie, Ng Lapseng, Johnny Chung, and Bernard Schwartz. China was tenacious about overcoming the U.S. as a world superpower.

Quoting author Roger Stone, “President Bill Clinton did more to damage U.S. national security than anyone else in American history. He is a traitor to our interests and he is guilty of espionage. He should have been arrested, impeached and convicted. The question is, how did this story escape mass media attention?”

Mathew Vadum writing for Canada Free Press.com in his article ‘Flashback: Bill Clinton Gave China Missile Technology‘ quotes David Horowitz’s 2016 book, ‘The Black Book of the American Left Volume 7: The Left in Power: Clinton to Obama‘: “‘That administration’s voluntary release of all the secrets of America’s nuclear tests, combined with the systematic theft of the secrets that were left as a result of its lax security controls, effectively wiped out America’s technological edge.'”

“One of the key technological breaks China received, without having to spy to get it, was the deliverance of supercomputers once banned from export for security reasons,” writes Horowitz. 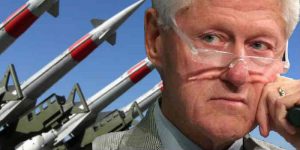 “Supercomputers underpin the technology of nuclear and missile warfare, and not only for firing and controlling the missiles. A supercomputer can simulate a nuclear test and is thus crucial to the development of nuclear warheads. But, according to a Washington Post editorial: ‘in the first three-quarters of 1998 nine times as many [supercomputers] were exported [to China] as during the previous seven years.’

“This transfer,” he writes, “was authorized three years after the spy thefts were detected. What rationale—besides stupidity, greed, or some other equally indefensible motive—could justify this? What responsible president or administration official, at any relevant level in any government, would allow the massive transfer of national-security assets like these to a dictatorship they knew had stolen their country’s most highly guarded military secrets?”

“They were able to accomplish this with indispensable assistance provided by the Clinton White House that allowed them to circumvent technology controls instituted for national-security purposes by previous administrations,” writes Horowitz. Back in the 1990s, as longtime Clinton bagman Terry McAuliffe, now governor of Virginia, set records raising money for the Clintons. In that era, congressional investigators unearthed an elaborate Communist Chinese money-laundering scheme. See: ‘Key Player in Clinton Betrayal of U.S. Tells All in Secret Video’ (very recent)

“Under it, money was funneled to the Clinton organization through businesspeople, including Yah Lin “Charlie” Trie. In that case, 94 individuals either refused questioning, pled the Fifth Amendment, or fled the country. Trie accepted a plea bargain with federal prosecutors in 1999 in exchange for providing information about questionable campaign contributions from China.

David Horowitz continues, “According to a Wall Street Journal account from Clinton days, a bipartisan congressional inquiry “found Beijing has stolen U.S. design data for nearly all elements needed for a major nuclear attack on the U.S., such as advanced warheads, missiles, and guidance systems. Targets of the spying ranged from an Army anti-tank weapon to nearly all modern fighter jets. Most wasn’t done by professionals, but by visitors or front companies.

security by the Clinton Administration is blamed in part, and satellite makers Hughes and Loral are criticized.”

The late William Norman Grigg writing for the New American magazine stated in 1999, “As the sides lined up for the ‘Trial of the Century’ in the Senate, debate raged as to whether witnesses would be heard, and — if so — who they would be: Monica Lewinsky? Bettie Currie? Vernon Jordan? Sidney Blumenthal? For those concerned about America’s national security, the crucial fact was that the witness list would not include John Huang, Johnny Chung, Yah Lin “Charlie” Trie, Maria Hsia, Ted Sioeng, or others found on the list of the more than 100 potential material witnesses in the so-called Chinagate affair who have fled, invoked the Fifth Amendment, or brazenly refused to cooperate with investigators. Therein lies the real triumph of Clintonite spin-control — and a tragic dereliction of duty on the part of Congress.”

FROM THE PHYLLIS SCHLAFLY REPORT:

The renowned author and national leader of the conservative movement, the late Phyllis Schlafly reported in 1998, “The fact that Clinton personally issued the waivers to allow shipments of U.S. technology that greatly improved the accuracy and reliability of Communist China’s missiles is grounds for impeachment, regardless of whether or not there was any quid pro quo for those decisions. U.S. space technology was just what China needs to make intercontinental ballistic missiles and point them more accurately at U.S. cities. And he did it despite the objections of the U.S. State Department, Defense Department, Justice Department, and intelligence agencies.

“Because China shared U.S. technology and equipment with Pakistan, Clinton is also responsible for India starting the nuclear race in Asia. India has fought three wars with its neighbor, Pakistan, since the end of World War II and looks upon Pakistan’s new military capabilities as a direct threat.”

MORE TREASON ON THE HILLARY WATCH

Continuing from Mathew Vadim’s above article: “Incessant propaganda from the Left during the recent campaign and the post-election period, has stressed President-elect Donald Trump’s connections to Russia while downplaying or ignoring altogether the Clintons’ relationship with the Kremlin.

“The connections of Trump, his family, his campaign staff, transition team, and would-be cabinet members to Russia are being microscopically examined and hyped daily in the news.

“But Hillary Clinton’s team also has ties to Russia. 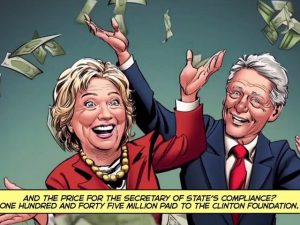 “Her campaign chairman John Podesta became a member of the board of directors of solar energy startup Joule Unlimited in 2011. Eight months later Rusnano, a Kremlin-backed investment fund announced it would invest around $35 million in Joule. A few months after, about the time Podesta joined then-Secretary of State Hillary Clinton’s Foreign Affairs Policy Board, Rusnano Chairman Anatoly Chubais joined Joule’s board.

“Podesta has been less than forthcoming about his relationship with the Russian government. “What he doesn’t like to talk about is the business he’s done with a Kremlin-backed investment firm and the lengths he’s gone to avoid scrutiny of this relationship,” the Wall Street Journal reported Oct. 23.

“And in August the FBI and Justice Department announced they were investigating the Podesta Group, a lobbying and public relations firm co-founded by John Podesta, for any connections to corruption that occurred in the government of former Ukraine President Viktor Yanukovych. Russia-controlled Uranium One retained the firm in 2012, 2014, and 2015, to lobby Clinton’s State Department and was paid $180,000 in fees.

TEFLON TREASON GOES ON – WHERE IS JUSTICE?

Bill Clinton arranged for the shipping and billing of 20% of our United States uranium supply clandestinely through a Canadian company to Russia while Hillary was Secretary of State and then the Clinton Foundation took in $145 million dollars for their effort. 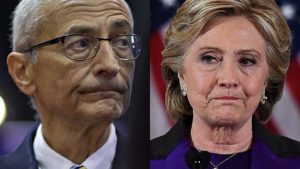 A Picture worth A Thousand Words – <em>Sweet!</em>

Mathew Vadim wraps it up, “Uranium One shareholders gave the corrupt Bill, Hillary and Chelsea Clinton Foundation more than $145 million in donations in the period before Hillary’s State Department approved a transaction giving Russia control over 20 percent of U.S. uranium. And as Russia, which initially didn’t have a controlling interest in Uranium One, was gearing up to take over the company, Bill Clinton received a whopping $500,000 for a single speech on Russian soil.

“And when he was president, Bill Clinton wasn’t exactly hostile toward Russia.

“As journalist Bill Gertz wrote years ago, Clinton sent ‘a billion dollars to Russia earmarked for its ‘nuclear disarmament program,’ even though the government’s own General Accounting Office has already determined that millions of these dollars are going to Russian scientists working to build new nuclear weapons for the Russian military.”

“Like Clinton, President Obama has written big checks to the nation’s enemies, sending $150 billion to the crazed mullahs of the Islamic Republic of Iran. Islamists have penetrated both of our political parties but only Democrats –the party more amenable to subversives— have two sitting congressmen, Keith Ellison of Minnesota and Andre Carson of Indiana, who are Islamists.”

Hillary should be marched directly to prison just for her many ‘gates’. She has gotten away with numerous scandals for way too long, including Whitewater, Travelgate, Bimbogate, Filegate, Pardongate, Furnituregate, Benghazigate and most recently it has become obvious that she committed treasonous acts including letting state secrets go to other countries in exchange for Clinton Foundation donations as well as erasing evidence of top-secret material from her private server. See: 25 and Counting: Hillary’s Huge Scandal List Explodes

Extremely thirsty greed for money and power coupled with very big balls, and phony smiles exuding confidence supported by wealthy influential elitists, cronies in media and Hollywood and Kool-Aid drinking, free stuff craving, deluded supporters as well as potent clout in the form of political pressure has provided plenty of cover in the past.

Awakened Americans should be sickened by the depth of treasonous acts against us by such nefarious and greedy people and make demands that justice be served. Where are the wills to prosecute?

What kind of Americans can commit such as all this? Extremely treasonous ones! Justice is way overdue!