The title of Jasper’s speech was “Frustrated With Politics?” That topic included his covering the politics of Idaho’s refugee resettlement plans, the unsustainable explosion of federal debt, the cost to taxpayers for fighting global warming, the takeover of the internet, and the continuing campaign of the United Nations to control our lives.

Pastor Len Pine made opening remarks reading from a letter to the editor in the morning’s newspaper that astonished those present by revealing the extent that the uninformed or minions of the socialist elite will stoop to quell free speech and the truth. He read part of those remarks: “If you go to that meeting tonight be aware they will fill you with wild conspiracy theories, half-truths mixed with bible references that will seem to be so convincing. If the John Birch Society is true to its past history these tactics are intended to make you fearful and susceptible to their message. You will find you will be called a communist if you disagree with their statements.” These statements were met with laughter.

A graduate of the University of Idaho, William F. Jasper has researched and written extensively on foreign and domestic politics, terrorism, national security, education, immigration, constitutional issues, the culture war, and most notably, the United Nations. Bill has also authored two books, “Global Tyranny … Step by Step” and “The United Nations Exposed.”

Since its inception in 1958 the John Birch Society has been known for original source facts that can be counted on. Likewise, its magazines have the reputation of being ‘the resource for facts and truth’ when absolute facts are sought since all the material presented is original source and always proofed by a team of three editors independently. The mission of the John Birch Society is to promote Limited Government, More Personal Responsibility and with God’s help – A Better World.

THE STATED AGENDA OF THE JOHN BIRCH SOCIETY

The John Birch Society is an activist/educational organization whose members employ truth as their only weapon. We believe that when a sufficient number of citizens are made aware of what is happening throughout the world, and who is making it happen, our nation will adopt a better course – both at the ballot box and in reversing the steady plunge toward socialism and total government.”

While bringing solid information to fellow Americans is paramount, we also understand the need to be involved simultaneously in stopping dangerous initiatives that are undermining our way of life and ignoring a variety of constitutional restraints. In fact, it is the action programs of The John Birch Society that serve as a springboard for our educational efforts. More often than not, what the insiders have in mind can be prevented by focusing on the principle involved, the danger of not adhering to it, and a careful but accurate exposure of the people who are promoting programs leading to a socialist tyranny.

Those who promote a destructive agenda don’t like exposure; they run from it.  At the same time, they create great noises claiming there is no organization behind what they are doing – that everything occurring is merely the haphazard result of trying to do their best. They use every means at their disposal to convince others that they have no real agenda and, at the same time, smear anyone who exposes what they are doing and who they are.

The agenda of the John Birch Society reflects the foundation in the Declaration of Independence, the practical and highly praised governmental system in the U.S. Constitution, and a belief in god who endows each person with rights. We draw a circle of Faith into which people may step and participate with other concerned citizens without violating their own religious beliefs. We welcome people of all walks of life and whatever race and ethnic background. In other words, we are Americans.

We do not operate in secrecy. All of our positions, beliefs, and practices are an open book.  All one has to do is go  online at JBS.org to see what we stand for and how we operate.

We are a monolithic organization because Founder Robert Welch knew that other groups had been destroyed by infiltrators and provocateurs who created feuding factions. The Conspiracy we seek to expose and rout would love nothing better than to see us battling each other. Its leaders would happily send their agents into our ranks to create splits and to have our members engaged in endless debates. Being monolithic avoids such destructiveness.  While we continue to operate with our original structure, members are free to work on the recommended agenda items they agree with and to skip those which they might be in disagreement.

Our Agenda will always address the issues and programs we believe to be the most important if we are to preserve the American system.  Some will be supported and others will be opposed. There will always be problems to solve and initiatives to support.

The foundation of the John Birch Society is its members. They consist of citizens from many races, religious beliefs and national origins. This vast membership works together across the country creating synergy resulting in positive change. They are patriotic citizens who cherish traditional American values and understand what can be accomplished following Constitutional law in a truly free society with less government and a thriving commerce. Want to restore America? Join the John Birch Society.

Who Was John Birch? 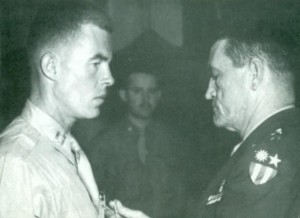 John Birch was a Baptist missionary in a remote province of China, when, through a series of extraordinary coincidences, he helped Colonel James Doolittle and several of his downed fliers to safety. He was subsequently inducted into the US Army as an intelligence officer under Gen. Chennault, and served for slightly over three years of our war with Japan. His remarkable feats of personal courage and leadership helped immeasurably to bring about a victory in China. Ten days following the end of the war, while on a peaceful mission with the Army, he was brutally killed by the Chinese Communists.

In 1958, Robert Welch explained at the founding meeting of The John Birch Society why he had chosen John as the namesake for the organization. He said, “…the young man I admire most of all those America has produced was a fundamentalist Baptist Missionary named John Birch. My own obsession with this fight against the increasing forces of evil in the world, which…has caused me to give up business career and income and any prospect of ever having any peace or leisure again during my lifetime, is due in large part to my admiration for John Birch; to my feeling that I simply had to pick up and carry, to the utmost of my ability and energy, the torch of a humane righteousness which he was carrying so well and so faithfully when the Communists struck him down.”

To see the video recording of this speech held in Spokane on Dec. 1, 2015 click here.

For links to articles covering topics in Mr. Jasper’s speech click on article links below.

The New American – That Freedom Shall Not Perish

Make www.thenewamerican.com your homepage and go-to page for all liberty-related news.

Below are links to important articles and videos referenced by The New American’s Senior Editor Bill Jasper at his “Frustrated With Politics?” speech. September 2015 marked the 30th anniversary of The New American; see our article “Thirty Years of Projecting the Lines,” http://www.thenewamerican.com/culture/history/item/21467-thirty-years-of-projecting-the-lines on TNA’s amazing record for spot-on accuracy in calling the shots on the things that matter most.

Behind the Oregon Standoff
http://thenewamerican.com/usnews/constitution/item/22499-behind-the-oregon-standoff

Victims of the Federal Bootprint 2-9-16
http://thenewamerican.com/tech/environment/item/22498-victims-of-the-federal-bootprint

Is Obama’s Refugee “Surge” Coming to Your Town?
http://www.thenewamerican.com/usnews/immigration/item/21694-is-obama-s-refugee-surge-coming-to-your-town