— Reprinted with Permission of The New American magazine —

At the end of October, Speaker of the House John Boehner (52 percent Freedom Index score) will resign from his speaker role, as well as from Congress altogether. He is quoted as saying that this is not an abrupt decision, but rather he had wanted to be gone from Congress since the end of last year. 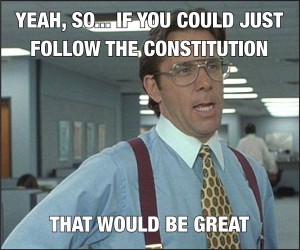 Speculation points the finger of blame to the conservative grassroots, of which Boehner publicly carried on a feud. He nearly lost his speakership earlier in the year after more constitutional congressmen stepped forward to challenge his position. However, due to poor organization and lack of a unified front, Boehner managed to squeak by to retain his role.

Congressman Paul Ryan (58 percent Freedom Index score) said he was taken by surprise by the decision and that he would not seek the role of House Speaker.

Based on these scores, we have to wonder what difference it will make to have another Speaker who is faithful to the Constitution just a little more than half the time.

In the meantime, it’s business as usual with Boehner. He has already declared that the government will not be shut down during this week’s fight to pass a continuing budget resolution to temporarily fund the federal government at present levels, without any changing in the funding of Planned Parenthood.

At least one conservative website is also suggesting that Boehner will want to get the Export/Import Bank reauthorized, a hard won fight by the grassroots. So stay vigilant!

And had the Trans-Pacific Partnership come to Congress under Boehner, you can bet Boehner would have done everything he could to get it passed. This now means that Republican establishment support is still there for it, but the grassroots should take advantage of this time to strike while the leadership is in question. Contact Congress today to voice your opinion on the detrimental TPP.

Join The John Birch Society and work with other members in your area to work toward less government, more responsibility and — with God’s help — a better world.