SOME GOOD NEWS: On January 24, 2017, U.S. Rep. Jason Chaffetz from Utah introduced the Local Enforcement for Local Lands Act (HR 622), which would strip the Bureau of Land Management and US Forest Service of its law enforcement capacity. If we could get that to pass, it would be a good beginning.

As Ron Paul said in 1997: “All government power is ultimately gun power and serves the interests of those who despise or do not comprehend the principles of liberty. The gun in the hands of law-abiding citizens serves to hold in check arrogant and aggressive government. Guns in the hands of the bureaucrats do the opposite. The founders of this country fully understood this fact.”

“Why does US Department of Agriculture (USDA) need submachine guns? The agency’s Office of Inspector General (OIG) is requesting .40 Caliber semiautomatic submachine guns along with 320,000 rounds of hollow point ammo.

“Why is the US Postal Service soliciting proposals for assorted small arms ammunition?

“Why has the Social Security Administration requested 174,000 rounds of hollow-point bullets?

“Why does the National Oceanic and Atmospheric Administration (NOAA), which oversees the National Weather Service, need 46,000 rounds of hollow point ammo?

DOES THAT SEEM ODD? Obama was not in power in 1997, but Bill Clinton was with his 25 members of the Council on Foreign Relations in his cabinet. To understand why that was bad for our Republic read ‘Who the Establishment Really Is.’ with members explaining how bad they are in their own words.

FOR WHAT PURPOSE DOES THE EPA NEED A SWAT TEAM? 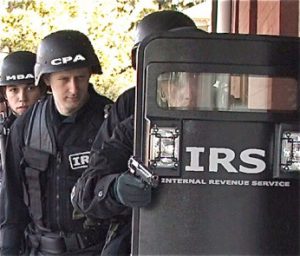 “For what purpose does the EPA need a SWAT team?” States Ernest Istook in his article “Too Many Federal Agencies Have Created Their Own Private Armies” at freerepublic.com, “Does the Environmental Protection Agency really need armed agents? Outside of law enforcement, federal agencies now employ over 25,000 people as armed agents. They are more than guards. They’ve become like private armies that can push around private citizens.

“Over 70 non-military federal agencies now have their own armed agents.

“As do the Food and Drug Administration. And Veterans Affairs. Even the Government Printing Office and the National Zoo. And of course the Library of Congress

“These are not just guards. These agents go out on raids to enforce the orders of federal bureaucracies. No bureaucracy should have a private army to enforce its orders against the American people.”

— Now for a Little Deserved Satire —

Re-assigning these agencies is the perfect answer to relieving our beleaguered Western States’ land owners of their besiegement and at the same time finding a fitting mission for those fine people in these agencies who are dedicated to making a difference in other people’s lives. 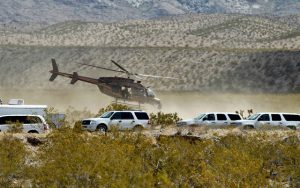 For those in these agencies so eager to play Rambo with all their expensive SWAT Team gear and ‘Government Motors’ (GM never paid back over $10 billion) vehicles, paramilitary vehicles, helicopters and assorted other toys, such as robots and drones, a truly fitting challenge worthy of all their training and expense would be to manage the land and lives of ISIS, the Shiites, Sunnis and the Taliban.

They try to convince us that they know more about land management and what is best for others than anyone. (Yet, The American Lands Council reports that the Federal government spends $16.17 an acre and gets a return of $11.79 an acre for forest lands they manage in Western lands for a loss of $4.38 per acre, contrasted to forest lands managed by the states themselves spending $2.56 an acre and getting a return of $37.16 an acre for a $34.60 an acre profit. This should be an easy sell to Idaho citizens if they were just made aware of real facts.) … Just saying… back to the sales pitch.

THERE IS MUCH THESE AGENCIES CAN DO

There is much for the depressed people in those Arab lands to benefit from with the help of these caring paramilitary agencies such as the planting of trees, protecting their new forests, saving endangered species, managing fishing harvests and livestock and the safest and most efficient use of all their precious water. The EPA will do wonders for saving a lot of Arab oil output for decades by ramping up even more Arab windmills, solar panels, electric cars and high-speed electric trains.

Arab sheiks have a lot to learn about redistribution of their wealth and the IRS can relieve them of a large part of it to pay for all this folderol. And guess what? There just happens to be a perfect man that just became available for leading such a great re-assignment endeavor.  Barack Hussein Obama is perfect for leading these challenged ‘govmint’ employees with all his wisdom about Muslims and how things should be. Actually his ancestors were from this Arab neighborhood and were, interestingly, actually slave traders. He’ll fit right in. All will be real good. Plus these BLM, Forest Service, Fish & Game, EPA and IRS folks practically worshiped him. Also, he’d probably do it all for free, now that he’s loaded, just for the legacy building since his intended legacy here is rapidly dissolving away.

THERE ARE DELIGHTFUL TRADE-OFFS FOR ALL THIS

Well, firstly these once heralded agencies will no longer be a tax drain on our system since the IRS can soak the sheiks for funding all the good the agencies will do watching after everything. That alone is worth saying sayonara to, not to mention that ‘we the people’ will be getting rid of some ‘govmint’ employees who are overpaid, inefficient and can’t be fired.

Now lastly, probably the biggest upside of this re-assigning of these dedicated Americans would be the recalling of our wonderful military troops in these god-forsaken semblances of civilization. I suggest our troops be billeted back here in our Western Lands where they could breathe most freely nearest true God-fearing Americans, with traditional values who understand what working, budgeting and self-reliance is all about and away from the extremely far left socialists.

Although these battle-worn troops deserve the respite in their new living conditions they will be available for dispatching as needed by President Trump to occasionally hammer down on the George Soros-funded professional violent anarchist rioters currently tearing up college campuses and American cities. These troops can efficiently handle the felonists’ acts with arrests for prosecution and hopefully stiff fines and incarceration sentences that locals are ineptly capable of or politically afraid of dealing with. They also would be perfect for backing up border control and cartel busting here and in Mexico.

That’s right in Mexico. Hey, Mexican police and military have invaded our country and had skirmishes with our Border Patrol many times in the past. They have been practically chauffeuring all the illegal aliens passing through their country on trains to our borders while giving cartel drug rings free passage. When you have a leaking faucet, you fix it. This large pipeline is pouring into America and it has to be plugged, and we have just the right repair company for the problem. It’s called the ‘President Trump Fixer Upper Company’ comprised of the finest employees on earth and the corrupt Mexican military won’t want to deal with it. It would be a true reckoning.

REPORT: IRS Continues SWAT Raids for Evasion While Hundreds of Agents Avoid Paying Any Taxes at All

Govt agencies like EPA, FDA are spending TENS OF MILLIONS on SWAT and military-style equipment

The United States of SWAT?

REID BUNKERVILLE LLC EXPOSED: IS THIS WHY BUNDY RANCH WAS TARGETED?