California environmental policy has forced the diversion of water from agricultural lands for years to instream flow, purportedly to help several species of fish, most infamously the Delta Smelt. This water, instead of keeping California’s croplands lush and productive, runs into the Pacific Ocean. The protracted drought in the San Joaquin Valley and other key agricultural regions is exacerbated by state environmental policy. The President is right. 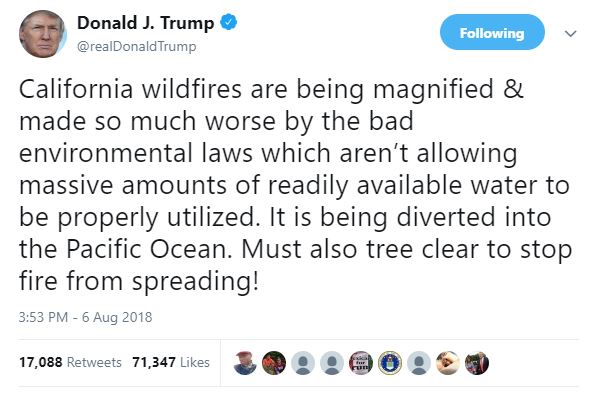 President Trump’s comment sent the environmentalist Left into paroxysms of indignation. A torrent of “you don’t know what you’re talking abouts” ensued, with the environmental experts at the New York Times placing wildfires squarely at the feet of “climate change” and by extension, the President, the Republican Party, and drivers of SUV’s. The brilliant scientists at CNN called the President’s wildfires tweet “ridiculous,” and the imminent forestry expert at NBC, Katy Tur, called it “strikingly ignorant.” And of course, these bastions of truth and scientific discovery should know, right?

Let’s start by dissecting the tweet. The reference to “readily available water” was not about water that could be pumped through hoses to douse fires. California environmental policy has forced the diversion of water from agricultural lands for years to instream flow, purportedly to help certain species of fish, most infamously the Delta Smelt. This water, instead of keeping California’s croplands lush and productive, ends up in the Pacific Ocean. The protracted drought in the San Joaquin Valley and other key agricultural regions is exacerbated by state environmental policy. The President is right. 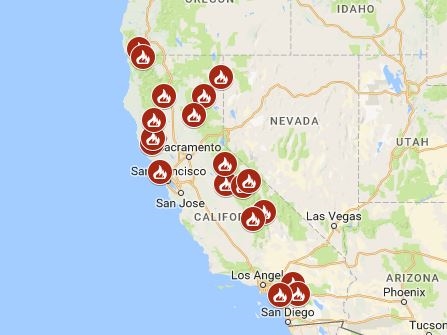 But California’s environmental policies are no worse than federal policies, especially those governing the state’s national forests. A majority of the trees in the Sierra Nevada are diseased, dying, or dead. With the generation-long war on logging, and dry biomass piling up due to insufficient clearing operations, California is a tinderbox. As California Assemblyman, Chuck Devore, wrote in Forbes on July 30:

In 2005 while a freshman California Assemblyman, I had the chance to visit Northern California and meet with the forest product industry professionals who grew, managed, and harvested trees on private and public lands. They told me of a worrisome trend started years earlier where both federal and state regulators were making it more and more difficult for them to do their jobs. As a result, timber industry employment gradually collapsed, falling in 2017 to half of what it was 20 years earlier, with imports from Canada, China, and other nations filling domestic need.

VALLEJO, Calif., December 11, 2017 – The USDA Forest Service today announced that an additional 27 million trees, mostly conifers, died throughout California since November 2016, bringing the total number of trees that have died due to drought and bark beetles to an historic 129 million on 8.9 million acres. The dead trees continue to pose a hazard to people and critical infrastructure, mostly centered in the central and southern Sierra Nevada region of the state.

“The number of dead and dying trees has continued to rise, along with the risks to communities and firefighters if a wildfire breaks out in these areas,” said Randy Moore, Regional Forester of the USDA Forest Service, Pacific Southwest Region. “It is apparent from our survey flights this year that California’s trees have not yet recovered from the drought, and remain vulnerable to beetle attacks and increased wildfire threat. The USDA Forest Service will continue to focus on mitigating hazard trees and thinning overly dense forests so they are healthier and better able to survive stressors like this in the future.”

Moore continued, “To increase the pace and scale of this important work, we need to fix how fire suppression is funded. Last year fire management alone consumed 56 percent of the USDA Forest Service’s national budget. As fire suppression costs continue to grow as a percentage of the USDA Forest Service’s budget, funding is shrinking for non-fire programs that protect watersheds and restore forests, making them more resilient to wildfire and drought.”

Though California received record-breaking rains in the winter of 2016-2017, the effects of five consecutive years of severe drought in California, a dramatic rise in bark beetle infestation and rising temperatures have led to historic levels of tree die-off. The Tree Mortality Task Force (TMTF), with support from the Governor’s office and comprised of more than 80 local, state and federal agencies and private utility companies, continues to remove hazardous dead trees. To date, the TMTF members have collectively felled or removed over 1 million dead trees; this includes over 480,000 dead trees felled or removed by the USDA Forest Service.

The TMTF members are using a triage approach to this tree mortality crisis, first focusing on public safety by removing dead and dying trees in high hazard areas. To further improve forest health, the USDA Forest Service and CAL FIRE have increased their pace and scale of prescribed fire. The USDA Forest Service has treated over 55,000 acres and CAL FIRE has completed over 33,000 acres in fuel treatment projects. By combining tree removal with prescribed fire, crews will be able to decrease overly dense stands of trees, reduce greenhouse gases, and protect communities across the state…

With a staggering 129 million dead trees in the state, the work of the task force is far from over. The strong foundation built will continue to be an advantage as the TMTF continues to address tree mortality and its impacts.

It’s always fun to watch President Trump blow up Twitter with remarks he knows will send leftists and elite media types into a tizzy. The comedic value, however, doesn’t outweigh his ability to start uncomfortable conversations about important topics that big government-loving leftists would rather ignore. But linking California’s catastrophic wildfires to government policy is imperative if real solutions are to be hammered out. We can only hope, however, that it’s not too late for California’s reality check.