The Coeur d’Alene chapter of The John Birch Society worked hard at awakening the sleeping masses during the local fair Aug. 26 – 30th. As only the JBS can with it’s unmatched depth in factual information on the broadest array of issues, the chapter informed many unknowing north Idahoans about the reasons our once great republic has been in such rapid decline heading toward a distastrous socialistic experience in a designed effort toward global governance. 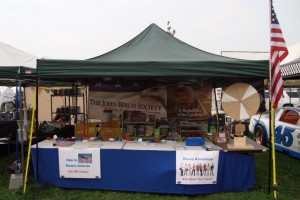 For the doubting Thomas, there were a red and a blue binder with the first and second page of 52 different issue articles each that attendees could request having e-mailed to them after the fair. Also, like traditional JBS booths many flyers were handed out free on several hot issues, such as the Free Trade scam, Constitutional Sheriffs, keeping the federal government out of our local police departments, the Constitutioal Convention ‘con job,’ closing the Federal Reserve, getting us out of the corrupt United Nations, identifying who’s really running and ruining America (the shadowy Council on Foreign Relations) and many more issues.

Recognizing the need and value of enlisting the energy and missionary zeal of awakened and informed patriotic young Americans the Cd’A chapter borrowed a great tool devised by Sandpoint Tea Party leader Robin Gray and her impressive son Asa, a North Idaho Collgege student and intern for state representative Sage Dixon. For their recent county fair they made what they call ‘The Freedom Wheel’ which young and old can spin like a ‘Wheel of Fortune’ for a geograhpical or patriotic question about Idaho or a Constitutional question about America. Win and you got a piece of candy.

A lot of fun was had with it, but more than the fun was the embarrassment displayed by many that couldn’t answer some very simple questions. The sound of a lot of crickets was heard frequently after the wheel spinning and some real dumb anwers just like the occasional ‘Watters World’ episodes on Fox News. The Freedom Wheel presented an opportunity to engage people that otherwise might not have stopped at the booth.

Attendance for the fair seemed to be about the same as last year but this second year gained a little more prominence for the JBS booth with some of the folks who came back from last year and some of them bringing friends. Activists are supposed to activate. These fairs and any other type of exposure to the public to enlighten and inform are invaluable to our important cause of trying to restore America and get us back to what brought us, our wonderful Constitution and nation of laws that are followed by elected officials that take seriously their Oaths to our Constitution and honor it sacredly.